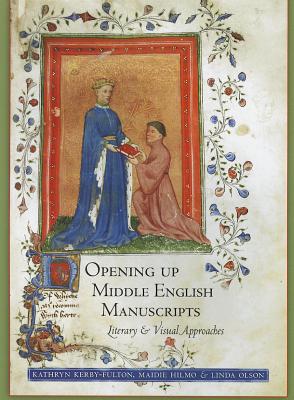 This deeply informed and lavishly illustrated book is a comprehensive introduction to the modern study of Middle English manuscripts. It is intended for students and scholars who are familiar with some of the major Middle English literary works, such as The Canterbury Tales, Gawain and the Green Knight, Piers Plowman, and the romances, mystical works or cycle plays, but who may not know much about the surviving manuscripts. The book approaches these texts in a way that takes into account the whole manuscript or codex--its textual and visual contents, physical state, readership, and cultural history. Opening Up Middle English Manuscripts also explores the function of illustrations in fashioning audience response to particular authors and their texts over the course of the fourteenth and fifteenth centuriesKathryn Kerby-Fulton, Linda Olson, and Maidie Hilmo--scholars at the forefront of the modern study of Middle English manuscripts--focus on the writers most often taught in Middle English courses, including Geoffrey Chaucer, William Langland, the Gawain Poet, Thomas Hoccleve, Julian of Norwich, and Margery Kempe, highlighting the specific issues that shaped literary production in late medieval England. Among the topics they address are the rise of the English language, literacy, social conditions of authorship, early instances of the Alliterative Revival, women and book production, nuns' libraries, patronage, household books, religious and political trends, and attempts at revisionism and censorship. Inspired by the highly successful study of Latin manuscripts by Raymond Clemens and Timothy Graham, Introduction to Manuscript Studies (also published by Cornell), this book demonstrates how the field of Middle English manuscript studies, with its own unique literary and artistic environment, is changing modern approaches to the culture of the book.

Kathryn Kerby-Fulton is The Notre Dame Professor of English at the University of Notre Dame. She is the author most recently of Books Under Suspicion: Censorship and Tolerance of Revelatory Writing in Late Medieval England, which won the Haskins Medal from the Medieval Academy of America. Maidie Hilmo, an affiliate of the University of Victoria, is the author most recently of Medieval Images, Icons, and Illustrated English Literary Texts: From the Ruthwell Cross to the Ellesmere Chaucer. Kerby-Fulton and Hilmo are coeditors of The Medieval Professional Reader at Work: Evidence from Manuscripts of Chaucer, Langland, Kempe, and Gower and The Medieval Reader: Reception and Cultural History in the Late Medieval Manuscript. Linda Olson is a writer and developer of distance education courses in English literature for the Open Learning Program at Thompson Rivers University in British Columbia. She is the coeditor with Kathryn Kerby-Fulton of Voices in Dialogue: Reading Women in the Middle Ages.