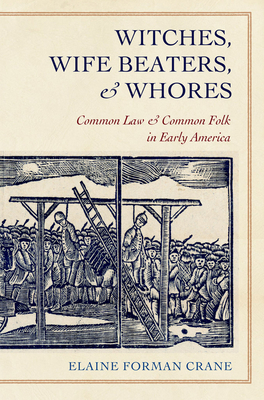 By Elaine Forman Crane
Email or call for price.
Usually Arrives in 2-10 Days

The early American legal system permeated the lives of colonists and reflected their sense of what was right and wrong, honorable and dishonorable, moral and immoral. In a compelling book full of the extraordinary stories of ordinary people, Elaine Forman Crane reveals the ways in which early Americans clashed with or conformed to the social norms established by the law. As trials throughout the country reveal, alleged malefactors such as witches, wife beaters, and whores, as well as debtors, rapists, and fornicators, were as much a part of the social landscape as farmers, merchants, and ministers. Ordinary people made law by establishing and enforcing informal rules of conduct. Codified by a handshake or over a mug of ale, such agreements became custom and custom became law. Furthermore, by submitting to formal laws initiated from above, common folk legitimized a government that depended on popular consent to rule with authority.

In this book we meet Marretie Joris, a New Amsterdam entrepreneur who sues Gabriel de Haes for calling her a whore; peer cautiously at Christian Stevenson, a Bermudian witch as bad as any in the world; and learn that Hannah Dyre feared to be alone with her husband--and subsequently died after a beating. We travel with Comfort Taylor as she crosses Narragansett Bay with Cuff, an enslaved ferry captain, whom she accuses of attempted rape, and watch as Samuel Banister pulls the trigger of a gun that kills the sheriff's deputy who tried to evict Banister from his home. And finally, we consider the promiscuous Marylanders Thomas Harris and Ann Goldsborough, who parented four illegitimate children, ran afoul of inheritance laws, and resolved matters only with the assistance of a ghost. Through the six trials she skillfully reconstructs here, Crane offers a surprising new look at how early American society defined and punished aberrant behavior, even as it defined itself through its legal system.

Elaine Forman Crane is Professor of History at Fordham University. She is the author of several books, including Killed Strangely: The Death of Rebecca Cornell, also from Cornell.