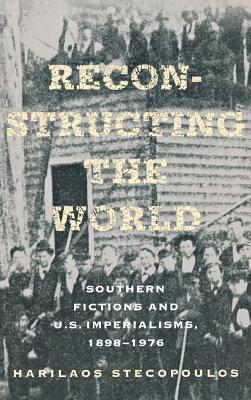 By Harilaos Stecopoulos
Email or call for price.

The unending tragedy of Reconstruction, wrote W. E. B. Du Bois, is the utter inability of the American mind to grasp its... national and worldwide implications. And yet the long shadow of Reconstruction's failure has loomed large in the American imagination, serving as a parable of race and democracy both at home and abroad. In Reconstructing the World Harilaos Stecopoulos looks at an array of American writers who, over the course of the twentieth century, used the South as a touchstone for thinking about the nation's global ambitions. Focusing on the lives and writings of Charles Chesnutt, Thomas Dixon, James Weldon Johnson, W. E. B. Du Bois, Carson McCullers, William Faulkner, Richard Wright, and Alice Walker, he shows the ways in which these public intellectuals viewed the U.S. South in international terms and questioned the relationship between domestic inequality and a quest for global power.By examining big stick diplomacy, World War II, and the Vietnam War in light of regional domestic concerns, Stecopoulos urges a reassessment of the American Century. Providing new interpretations of literary works both well-known (Johnson's The Autobiography of an Ex-Colored Man, McCullers's The Member of the Wedding) and marginal (Dixon's The Leopard's Spots, Du Bois's Dark Princess), Stecopoulos argues that the South played a crucial role in mediating between the national and imperial concerns of the United States. That intersection of region and empire, he contends, profoundly influenced how Americans understood not only cultural and political geographies but also issues of race and ethnicity.

Harilaos Stecopoulos is Assistant Professor of English at the University of Iowa. He is the coeditor, with Michael Uebel, of Race and the Subject of Masculinities.