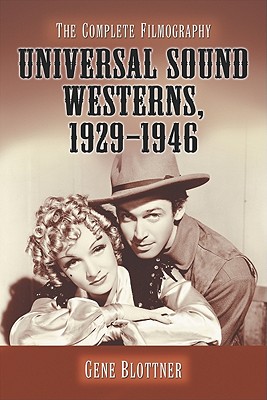 By Gene Blottner
Email or call for price.

After Fox released In Old Arizona, the first feature length western with sound, in 1929, Universal president Carl Laemmle decided that Universal's westerns should follow suit. Beginning that same year, with the release of The Wagon Master starring Ken Maynard, up until 1946, when the studio merged with International Pictures, Universal Pictures captivated audiences with its sound westerns. Individual entries for the approximately 180 feature films and serials released by Universal during that period are presented here. Each entry includes the film's title release date, alternate title, cast, credits, songs, location of filming, running time, source if the film was an adaptation, plot synopsis, commentary from the author and from the actors and directors, representative excerpts from reviews, and a tag line from the original advertising. Also provided is a chronological listing of Universal's short western films and a chronological listing of Universal's sound westerns.

A retired pharmacist, Gene Blottner has written for such publications as Western Clippings and Under Western Skies. He is the author of several books with McFarland and lives in Norfolk, Virginia.