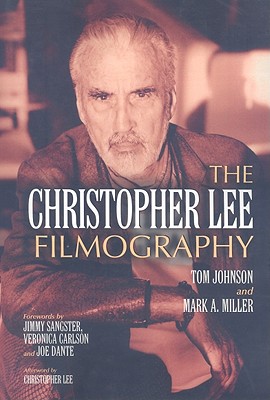 By Tom Johnson, Mark A. Miller
Email or call for price.

The career of Christopher Lee has stretched over half a century in every sort of film from comedy to horror and in such diverse roles as the Man With the Golden Gun, Frankenstein's monster, Fu Manchu and Sherlock Holmes. From Corridor of Mirrors in 1948 to Star Wars: Episode II-Attack of the Clones in 2002, this reference book covers 166 theatrical feature films: all production information, full cast and crew credits, a synopsis, and a critical analysis, with a detailed account of its making and commentary drawn from some thirty hours of interviews with Lee himself. Two appendices list Lee's television feature films and miniseries and his short films. The work concludes with an afterword by Christopher Lee himself. Photographs from the actor's private collection are included.

Tom Johnson, author of several books on horror cinema, taught and coached cross country and track for 30 years. He is still involved in the school system and lives in Shillington, Pennsylvania. The late Mark A. Miller (1956-2014) wrote for many periodicals, including Filmfax and Shivers. He taught English in Gahanna, Ohio.