Bard in the Bluegrass: Two Centuries of Shakespearean Performance in Lexington, Kentucky (Paperback) 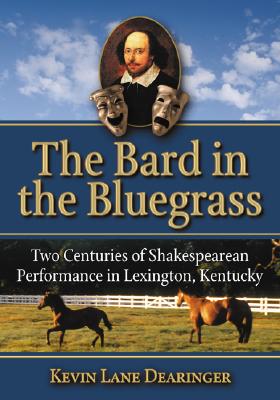 By Kevin L. Dearinger
Email or call for price.

Lexington, Kentucky, has been called the cradle of the legitimate theatre west of the Appalachians since the opening of its first theatre in 1808. Not long after that opening, a fledgling resident acting company presented Macbeth, the town's first professional production of a Shakespearean play. Since then, the local and traveling stars committed to drama drove Lexington's live theatrical glamour to thrive impressively into the twentieth century. Many of the actors who performed in Lexington in the plays of Shakespeare have been forgotten, but their vivid personalities and devotion to their art were once an integral part of American popular culture. The history of their careers and their lives is an important part of theatre history, of Kentucky history, and of American history. This study presents detailed accounts of individual actors in the order of their first appearances in Lexington. Early chapters explore the range of exposure to hakespeare's plays and players experienced by the town of Lexington and investigate the cultural climate that affected and was affected by that experience. Because Lexington's theatrical history provides a template for what so many mid-American towns experienced in the nineteenth and early twentieth centuries, a section of the book explores how hundreds of American cities connected by the early turnpikes and railroads constituted a community of theatre towns that cherished Shakespeare as a keystone of American culture. Remaining chapters are devoted to the lives and careers of the inspiring performers who brought Shakespeare's words to life over the centuries. Reviews published in Lexington, supplemented with details from newspapers of New York and other cities, have provided source material. In addition, theatrical biographies, histories, historical photographs, programs, advertisements, theatrical journals, scrapbooks, film, and even primitive sound recordings are examined in an attempt to reconstruct something of what Lexington saw and heard of Shakespeare on its local stages.