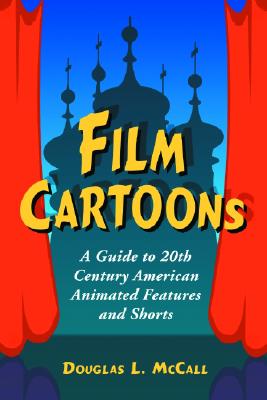 By Douglas L. McCall
Email or call for price.

This work covers ninety years of animation from James Stuart Blackton's 1906 short Humorous Phases of Funny Faces, in which astonished viewers saw a hand draw faces that moved and changed, to Anastasia, Don Bluth's 1997 feature-length challenge to the Walt Disney animation empire. Readers will come across such characters as the Animaniacs, Woody Woodpecker, Will Vinton's inventive Claymation figures (including Mark Twain as well as the California Raisins), and the Beatles trying to save the happy kingdom of Pepperland from the Blue Meanies in Yellow Submarine (1968). Part One covers 180 animated feature films. Part Two identifies feature films that have animation sequences and provides details thereof. Part Three covers over 1,500 animated shorts. All entries offer basic data, credits, brief synopsis, production information, and notes where available. An appendix covers the major animation studios.

Writer Douglas L. McCall of Bangor, Maine, has been interested in animation since childhood. He has been a Monty Python fan and collector for more than thirty years.