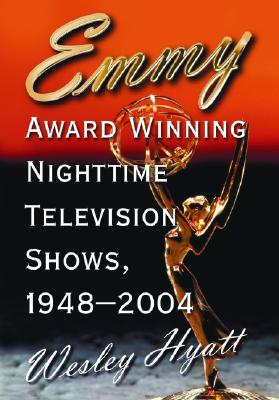 By Wesley Hyatt
Email or call for price.

Since the early days of television, well before most households had a set, the Academy of Television Arts and Sciences has been handing out honors for the industry's best efforts. Now fans can read about their favorites--and perhaps rediscover some forgotten pleasures--in this reference to prime time and nighttime Emmy winners. Beginning with the heated charade contest known as Pantomime Quiz, which won Most Popular Program of 1948 in the first Emmy Awards ceremony (held in 1949), each of more than 100 winning shows gets star treatment with an entry that includes the year of award or awards, air times, hosts, guests, casts and a full discussion of the show's history and run. Many of the entries include original interviews with cast or crew members. With such rich information, each show's entry constitutes a chapter in the history of television through the story of the show and the people who made it happen. The best of variety, drama, game shows, comedies, adventures and many more categories are featured. An appendix offers interesting facts and figures and ranks shows according to such statistics as longest run, longest delay from debut to win, and most Emmys won.

Wesley Hyatt, a senior writer with MMI Public Relations, has also served as a television historian and consultant for several media sources. He is the author of several McFarland titles and lives in Durham, North Carolina.