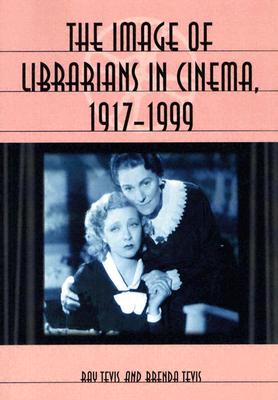 By Ray Tevis, Brenda Tevis
Email or call for price.

From its earliest days to the present, the onscreen image of the librarian has remained largely the same. A silent 1921 film set the precedent for two female librarian characters: a dowdy spinster wears glasses and a bun hairstyle, and an attractive young woman is overworked and underpaid. Silent films, however, employed a variety of characteristics for librarians, showed them at work on many different tasks, and featured them in a range of dramatic, romantic, and comedic situations. The sound era (during which librarians appeared in more than 200 films) frequently exaggerated these characteristics and situations, strongly influencing the general image of librarians. This chronologically arranged work analyzes the stereotypical image of librarians, male and female, in primarily American and British motion pictures from the silent era to the 21st century. The work briefly describes each film, offering some critical commentary, and then examines its librarian, considering every aspect of the total character from socio-economic conditions and motivations for leaving or not leaving the library, to personal attributes (such as clothing, hair, and age) and entanglements with the opposite sex, to commonly used props, plot situations and lines (Shush ). The work comments on whether librarians and library work are depicted accurately and analyzes the development of the public's image of a librarian. The accompanying filmography lists librarian characters and notes stereotypes such as buns and eyeglasses. With bibliography and index.

Ray Tevis and Brenda Tevis are both librarians living in Phoenix, Arizona.