Jules Verne on Film: A Filmography of the Cinematic Adaptations of His Works, 1902 Through 1997 (Paperback) 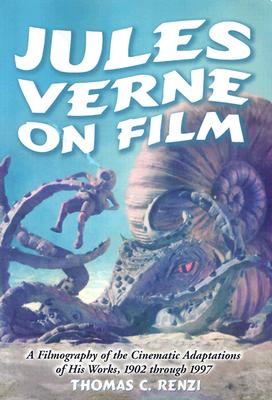 By Thomas C. Renzi
Email or call for price.

Jules Verne--Voila --a name that resonates with visions of fantastic adventures and images of exotic exploits. In his voyages extraordinaires, the noted French author fuses his encyclopedic knowledge of science and geography with his ability to tell fascinating tales, taking his readers on unprecedented journeys across the globe, into the earth, and out into space. This revered writer, who with his boundless imagination had hoped to contribute substantially to the world of letters, has surpassed that expectation to become coincidentally a significant influence on film. Jules Verne on Film is both a penetrating analytical overview of Verne's epic novels and a comprehensive filmography of the numerous films inspired by his stories and characters. There are the obvious adaptations that come directly from the pages of Verne's writings, films such as In Search of the Castaways and Mysterious Island. However, looking closely at the plots, characters, and themes of many other films--science fiction and otherwise--one discovers that the incomparable Verne has had a far wider influence on filmmakers than one might have thought. For instance, most of us are familiar with Disney's 20,000 Leagues Under the Sea (1954) and some of us may have even seen the two 1997 television productions. But Verne's classic undersea adventure also provides the underpinnings for such entertaining movies as Fantastic Voyage (1966) and Innerspace (1987). Structurally, Jules Verne on Film begins with a biographical sketch and contains 23 chapters arranged alphabetically according to book title, starting with The Adventures of Captain Hatteras and ending with Voyage Across the Impossible. Each chapter includes a summary and analysis of Verne's story, followed by a chronological treatment of the cinematic adaptations compared to their respective written work. Production credits appear in the film entries, along with plot synopses and thorough critical commentaries.

The late Thomas C. Renzi was an administrator and instructor at Buffalo State College in Buffalo, New York.