The Pirate Coast Lib/E: Thomas Jefferson, the First Marines, and the Secret Mission of 1805 (Compact Disc) 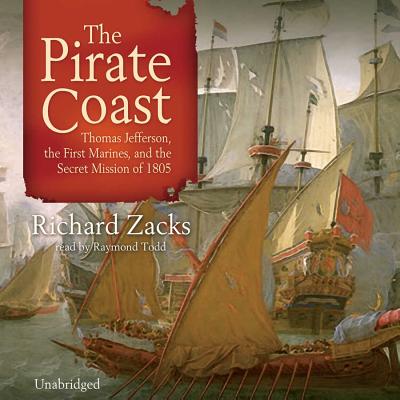 After Tripoli declared war on the United States in 1801, Barbary pirates captured three hundred US sailors and marines. President Jefferson sent out navy squadrons, but he also authorized a secret mission to overthrow the government of Tripoli. He chose an unlikely diplomat, William Eaton, to lead the mission. But before Eaton departed, Jefferson grew wary of the affair and withdrew his support.

Astoundingly, Eaton persevered, gathering a ragtag army and leading them on a brutal march across five hundred miles of desert. After surviving sandstorms, treachery, and near death, Eaton achieved a remarkable victory on "the shores of Tripoli," gaining freedom for the American hostages and new respect for the young United States. But as Eaton dared to reveal that the president had deserted him, Jefferson set out to crush him. Richard Zacks brings this important story of America's first overseas covert operation to life.