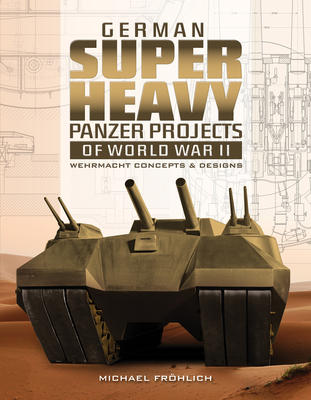 By Michael Fröhlich
$35.00
Email or call for price.

Tank design bureaus first became involved in the development of very heavy tanks after WWI. In addition to the militaries of Germany and England, the Soviet Union was also fascinated by these monsters. Behind it was the concept of transferring the heavy armament of naval warfare to land warfare. These superheavy vehicles were to move across the land the way battleships moved on the sea, and were to be capable of simultaneously defeating enemy forces from any direction. In this follow-up to his highly regarded work on the Panzerkampfwagen "Maus," Michael Fr hlich turns his attention to the other superheavy Wehrmacht designs, such as the Grille 17, the L we VK 7001, the R umer S, the M rser B r, the E-100 (successor to the Maus), and the 1,100-ton Urling armored howitzer. Fr hlich comprehensively describes their development, technology, and testing, and the eventual fate of those vehicles that were built or only projected. Many rare and never-before-published photographs and drawings of the vehicles complement this unique work.