Fearless: One Woman, One Kayak, One Continent (Paperback) 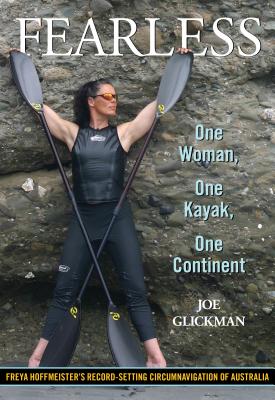 Like the instant classic The Last American Man, Fearless is the story of a remarkable individual who accepts no personal limits-including fear. Freya Hoffmeister, a forty-six-year-old former sky diver, gymnast, marksman, and Miss Germany contestant, left her twelve-year-old son behind to paddle alone and unsupported around Australia-a year-long adventure that virtually every expert guaranteed would get her killed. She planned not only to survive the 9,420-mile trip through huge, shark-infested seas, but to do it faster than the only other paddler who did it. As journalist and expert kayaker Joe Glickman details the voyage of this Teutonic force of nature, he captures interminable days on the water and nights camped out on deserted islands; hair-raising encounters with crocs and great white sharks; and the daring 300-mile open-ocean crossing that shaved three weeks off her trip. For 332 days Glickman followed Freya's journey on her blog-along with a far-flung audience of awestruck, even lovesick, groupies-as she took on one terrifying ordeal after the next. In the end, he says, "her vanity and pigheadedness paled next to her nearly superhuman ability to master fear and persevere.

Joe Glickman is a recipient of the Lowell Thomas Award for travel writing. His work has appeared in Outside, Men's Journal, National Geographic Adventure, Backpacker, Canoe & Kayak, and leading national newspapers. His books include To The Top and The Kayak Companion. He is a two-time member of the U.S. National Marathon Kayak Team.

“Freya Hoffmeister’s voyage was bold, ambitious, and reckless—like so many of the truly great adventures!” –Bear Grylls, author of Mud, Sweat, and Tears and The Kid Who Climbed Everest

"Fearless is a compelling read about Freya Hoffmeister’s 2009 circumnavigation of Australia. Author Joe Glickman intertwines the story of a dangerous and difficult year-long adventure with an unflinching look at The Woman in Black, arguably the most accomplished and enigmatic kayaker on the planet." --Sea Kayaker Magazine

"Fearless is a page-turner, benefiting from gripping language and a conversational tone in the style of contemporary adventure-lit classics like Jon Krakauer (Into Thin Air, Into the Wild) and Susan Casey (The Devil’s Teeth, The Wave)." --Canoe and Kayak

"For paddlers and non-paddlers alike, the book is by all means an exciting read, marked both by Hoffmeister’s tenacity as well as Glickman’s for following through with the project and its somewhat stubborn star. Throughout the book, you can feel both Glickman’s frustration with Hoffmeister’s hubris, but also his admiration for her accomplishing one of the hardest feats imaginable in paddling." --Paddling Life

"Fearless is a tribute to the indomitable spirit of Freya Hoffmeister as she battled to become the first woman to circumnavigate Australia alone in a sea kayak. Ms. Hoffmeister’s accomplishment will endure and inspire not only because of the miles she paddled or her speed on the water, but because she refused to believe it couldn’t be done." -- Warren Richey, author of Without a Paddle

"I’m intrigued by people who do things the rest of us think are impossible. Fearless is just such an adventure, with the added twist that the intrepid explorer is a brash and beautiful woman who has a unique view of life. Author Joe Glickman’s crisp writing puts us in the kayak with this unusual heroine on her incredibly dangerous journey. Hang on!" --Michael Tougias, author of Fatal Forecast, Overboard!, and Ten Hours Until Dawn.