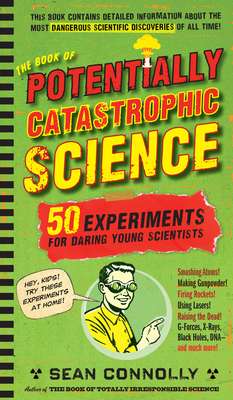 It’s never been more important to engage a child's scientific curiosity, and Sean Connolly knows just how to do it—with lively, hands-on, seemingly "dangerous" experiments that pop, ooze, crash, and teach! Now, the author of The Book of Totally Irresponsible Science, takes it one step further: He leads kids through the history of science, and then creates amazing yet simple experiments that demonstrate key scientific principles.

Tame fire just like a Neanderthal with the Fahrenheit 451 experiment. Round up all your friends and track the spread of "disease" using body glitter with an experiment inspired by Edward Jenner, the vaccination pioneer who's credited with saving more lives than any other person in history. Rediscover the wheel and axle with the ancient Sumerians, and perform an astounding experiment demonstrating the theory of angular momentum. Build a simple telescope—just like Galileo's—and find the four moons he discovered orbiting Jupiter (an act that helped land him in prison). Take a less potentially catastrophic approach to electricity than Ben Franklin did with the Lightning Mouth experiment. Re-create the Hadron Collider in a microwave with marshmallows, calculator, and a ruler—it won't jeopardize Earth with a simulated Big Bang, but will demonstrate the speed of light. And it's tasty!

By letting kids stand on the shoulders of Aristotle, Newton, Einstein, the Wright brothers, Marie Curie, Darwin, Watson and Crick, and more, The Book of Potentially Catastrophic Science is an uncommonly engaging guide to science, and the great stories of the men and women behind the science.

Sean Connolly is the author of the Totally Irresponsible Science series and dozens of other books for both children and adults. A father of three, he is in an ideal position to explain the nuts and bolts of these experiments. He lives in England.

“This book stands out from the crowd of guides to science experiments that can be performed at home. Whereas many such works present a hodgepodge of standard experiments, Connolly builds this one around the theme of major scientific and technological breakthroughs that have occurred over the past 2-plus million years of human history—arranged from the first stone tools crafted by Homo erectus to the Large Hadron Collider now being used to accelerate particles to speeds approaching that of light. Each of the 34 chapters comprises descriptions of an advance and its context, the science behind it, and one or more experiments that demonstrate underlying principles. These are presented in a breezy and engaging style. Although calling the discoveries potentially catastrophic is sure to intrigue a certain kind of young experimenter, the author’s explanations note both the benefits and the drawbacks of the advances. Parents will appreciate the “catastrophic meter” reading for each experiment, which indicates the hazards involved and the appropriate level of adult supervision. The experiments and their ties to the science are consistently creative: One can spool DNA onto a skewer after isolating it from a half-eaten banana. A handmade oven works because of some of the principles behind a laser beam. The speed of light can be estimated using a microwave oven, marshmallows, and a ruler. Even adults who have survived many science fairs will find themselves temped to try some of Connolly’s experiments.”


"A lot of mankind's greatest advances have been just a smidge away from disaster. The Wright Brothers' flying machine, Ben Franklin's fiddling with lightning, Enrico Fermi's chain reaction. In the book, Connolly explains these discoveries and applies the concepts to scaled-back (and kid-safe) experiments that use common household items. Each experiment gets rated on a "catastrophe meter," so adults can judge the danger quotient and how much help they need to offer."

"Budding scientists can learn about principles such as air resistance, condensation and the electromagnetic spectrum. But they learn because Connolly has them making a parachute that safely delivers eggs, crushing a can through sudden condensation or projecting an image of the bones in their hand on a wall. It's all done in an engaging, fun manner."