The Language of God: A Scientist Presents Evidence for Belief (CD-Audio) 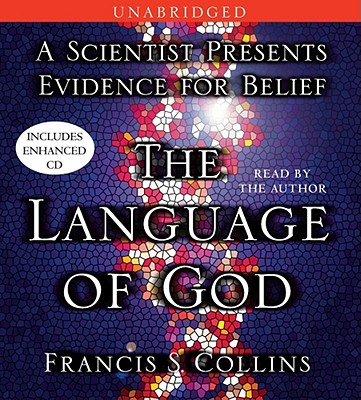 An instant bestseller from Templeton Prize–winning author Francis S. Collins, The Language of God provides the best argument for the integration of faith and logic since C.S. Lewis’s Mere Christianity.

It has long been believed that science and faith cannot mingle. Faith rejects the rational, while science restricts us to a life with no meaning beyond the physical. It is an irreconcilable war between two polar-opposite ways of thinking and living. Written for believers, agnostics, and atheists alike, The Language of God provides a testament to the power of faith in the midst of suffering without faltering from its logical stride. Readers will be inspired by Collin’s personal story of struggling with doubt, as well as the many revelations of the wonder of God’s creation that will forever shape the way they view the world around them.

"What an elegantly written book. In it Francis Collins, the eminent scientist, tells why he is also a devout believer.... A real godsend for those with questioning minds but who are also attracted to things spiritual."

"The world respects Francis as a brilliant scientist responsible for breakthrough discoveries benefiting mankind. For a decade I have been privileged to admire him as a devoted family man and talented musician with a charmingly sharp wit. This intellectually honest, spiritually grounded reconciliation of God and science helps answer your greatest questions. I was profoundly enlightened and believe this important book should be required reading."

"Francis Collins, one of the world's most distinguished scientists, treats the relationship of science and religion with reason and reverence. Collins's mix of clear technical exposition and personal reflection is infused with an intellectual and spiritual honesty. Everyone who questions how religious faith could be reconciled with scientific knowledge, everyone who fears that modern science attacks the heart of religious faith, everyone interested in an enlightened discussion of a crucial issue of our time should read this book."

"In today's world, scarred by cultural warfare, it is rare for a scientist to offer a testimony of faith in God. For that scientist to be one of the world's most renowned is rarer still. For his testimony to be so lucid and compelling, combining reason and revelation, science and spirit, is unheard of. The Language of God belongs on the shelf of every believer and every seeker."