Wake Up, Sir!: A Novel (Paperback) 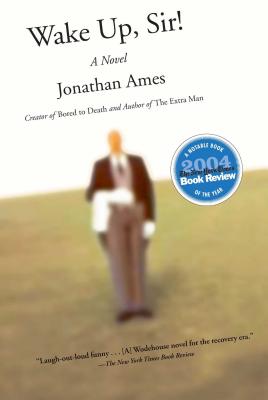 From the creator of the HBO series Bored to Death, the story of a young alcoholic writer and his personal valet, a hilarious homage to the Bertie and Jeeves novels of P.G. Wodehouse.

Alan Blair, the hero of Wake Up, Sir!, is a young, loony writer with numerous problems of the mental, emotional, sexual, spiritual, and physical variety. He's very good at problems. But luckily for Alan, he has a personal valet named Jeeves, who does his best to sort things out for his troubled master. And Alan does find trouble wherever he goes. He embarks on a perilous and bizarre road journey, his destination being an artists colony in Saratoga Springs. There Alan encounters a gorgeous femme fatale who is in possession of the most spectacular nose in the history of noses. Such a nose can only lead to a wild disaster for someone like Alan, and Jeeves tries to help him, but...well, read the book and find out!

Jonathan Ames is the author of I Pass Like Night; The Extra Man; What’s Not to Love?; My Less Than Secret Life; Wake Up, Sir!; I Love You More Than You Know; The Alcoholic; and The Double Life Is Twice As Good. He’s the creator of the HBO® Original Series Bored to Death and has had two amateur boxing matches, fighting as “The Herring Wonder.” His most recent work is the detective novel A Man Named Doll.

Sarah Vowell author of The Partly Cloudy Patriot Very funny and altogether elegant, this tale of an endearing drunk and his unflappable manservant is a love story of sorts, but with an American twist. Here, a valet is just a friend one pays.

A. M. Homes author of Music for Torching Wake Up, Sir! takes on the big themes -- the homosexual question, the Jewish question, the great American novel question, and more -- in this witty, wild romp about a somewhat disturbed young writer. Comic and incredibly accurate: if anyone ever wanted to know what a writer has to endure in order to produce, Jonathan Ames has made it perfectly clear. Wake Up, Sir! is bound to delight.

Colson Whitehead author of John Henry Days A hilarious journey into one man's labyrinthine neuroses, with day trips to compulsion and delusion. The perfect gift for anyone who has ever imagined having a manservant.