Farther Than Any Man: The Rise and Fall of Captain James Cook (Paperback) 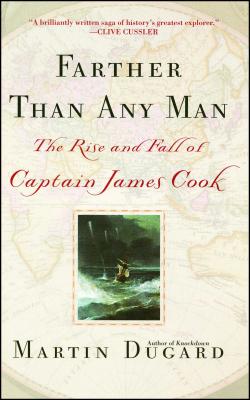 In the annals of seafaring and exploration, there is one name that immediately evokes visions of the open ocean, billowing sails, visiting strange, exotic lands previously uncharted, and civilizations never before encountered -- Captain James Cook.
This is the true story of a legendary man and explorer. Noted modern-day adventurer Martin Dugard, using James Cook's personal journals, strips away the myths surrounding Cook's life and portrays his tremendous ambition, intellect, and sheer hardheadedness to rise through the ranks of the Royal Navy -- and by his courageous exploits become one of the most enduring figures in naval history.
Full or realistic action, lush descriptions of places and events, and fascinating historical characters such as King George III and the soon-to-be-notorious Master William Bligh, Dugard's gripping account of the life and death of Captain James Cook is a thrilling story of a discoverer hell-bent on going farther than any man.

Martin Dugard is the New York Times bestselling author of Into Africa, The Training Ground, Last Voyage of Columbus, and The Explorers. He is also the coauthor, with political commentator Bill O’Reilly, of Killing Lincoln, Killing Kennedy, Killing Jesus, and Killing Patton. He lives in Southern California with his wife and three sons.