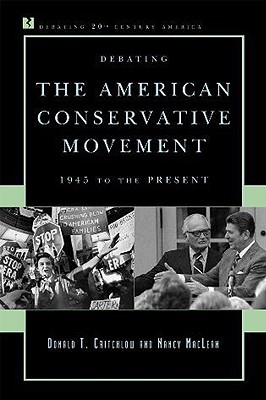 Debating the American Conservative Movement chronicles one of the most dramatic stories of modern American political history. The authors describe how a small band of conservatives in the immediate aftermath of the Second World War launched a revolution that shifted American politics to the right, challenged the New Deal order, transformed the Republican party into a voice of conservatism, and set the terms of debate in American politics as the country entered the new millennium. Historians Donald T. Critchlow and Nancy MacLean frame two opposing perspectives of how the history of conservatism in modern America can be understood, but readers are encouraged to reach their own conclusions through reading engaging primary documents.

Donald T. Critchlow is professor of history at St. Louis University and the author of numerous scholarly articles and books, including The Conservative Ascendency: How the GOP Right Made Political History and Phyllis Schlafly and Grassroots Conservatism. Nancy MacLean is professor of history and African-American studies at Northwestern University, and the author of Behind the Mask of Chivalry: The Making of the Second Ku Klux Klan; Freedom is Not Enough: The Opening of the American Workplace and The American Women's Movement: A Brief History with Documents.