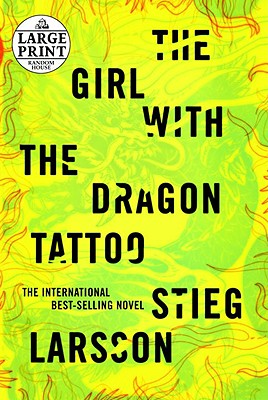 By Stieg Larsson, Reg Keeland (Translated by)
$24.95
Email or call for price.

This is book number 1 in the Millennium Series series.

Harriet Vanger, a scion of one of Sweden's wealthiest families disappeared over forty years ago. All these years later, her aged uncle continues to seek the truth. He hires Mikael Blomkvist, a crusading journalist recently trapped by a libel conviction, to investigate. He is aided by the pierced and tattooed punk prodigy Lisbeth Salander. Together they tap into a vein of unfathomable iniquity and astonishing corruption.

“An exceptional effort for a first-time crime novelist. In fact, a fine effort for any crime novelist . . . This book is meticulously plotted, beautifully paced, and features a cast of two indelible sleuths and many juicy suspects.”
–Boston Globe