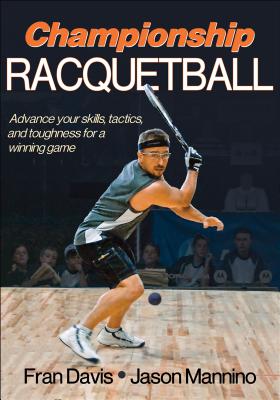 By Fran Davis, Jason Mannino
$19.95
Email or call for price.

Take your game to the next level with Championship Racquetball—the most comprehensive guide for mastering the skills, tactics, and strategies of today’s game.

Renowned coach and hall of famer Fran Davis teams up with racquetball legend and top-ranked player Jason Mannino to share their expertise and secrets on every aspect of the sport—from mastering the skills to recognizing weaknesses and establishing the strategies that will dominate your opponent during match play.

Championship Racquetball will show you how to master these aspects of the game:

•Round out your arsenal with offensive and defensive specialty shots.

•Establish a winning game plan and match strategy for any opponent.

•Win the mental game every time with the proven psychological and mental strategies used by top players.With detailed instruction, of the most effective skill-development drills, and practice, training, and match preparation tips for singles and doubles, this is the essential guide for any serious player. If you want to play like a champion, turn to the champions—Davis, Mannino, and Championship Racquetball.

Fran Davis’ career has spanned 30 years as a competitor and coach. She instructed top professional and world champion junior players, including Paola Longoria, Rocky Carson, Taylor Knoth, and Jason Mannino. She served as the U.S. national team coach for 8 years; during her time as a player, she won 4 national championships.

Davis was selected by USA Racquetball as the Woman of the Year in 2009. In 2004, she was inducted into the Racquetball Hall of Fame for her excellence and dedication to the sport.

Davis is a staff writer for Racquetball Magazine and serves as a commentator for IRT Network (www.IRTNetwork.com). She lives in Seattle, Washington, where she enjoys biking, hiking, and spending time with her family.

Jason Mannino has been playing professionally and coaching for over 15 years. He has been ranked as the No. 1 player in the world during 3 different seasons and ended 2003 as the International Racquetball Tour (IRT) Player of the Year. In 1998, he received the IRT Most Improved Player Award; in 1996, he was named IRT Rookie of the Year.

Mannino has contributed to numerous articles for Racquetball Magazine and on the Men’s Professional RacquetballForum. He resides in California with his wife, Christina, and children Jason and Jared. In his spare time, he enjoys golf, racquetball, tennis, biking, and coaching the kids in sports.

"Fran Davis is one of the premiere instructors in the United States. In Championship Racquetball, she and Jason Mannino share their winning approach to benefit all players."

"Championship Racquetball helps you take your game to the next level and is an essential resource for any player."

“Championship Racquetball is every racquetball player’s dream. Absorb this book, and become a more consistent winner."