American Baby: A Mother, a Child, and the Shadow History of Adoption (Hardcover) 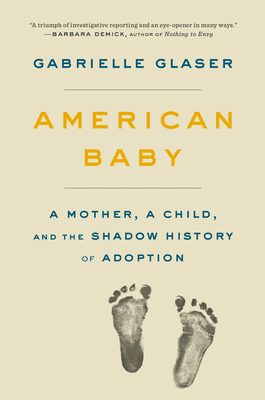 The shocking truth about postwar adoption in America, told through the bittersweet story of one teenager, the son she was forced to relinquish, and their search to find each other.

During the Baby Boom in 1960s America, women were encouraged to stay home and raise large families, but sex and childbirth were taboo subjects. Premarital sex was common, but birth control was hard to get and abortion was illegal. In 1961, sixteen-year-old Margaret Erle fell in love and became pregnant. Her enraged family sent her to a maternity home, and after she gave birth, she wasn't even allowed her to hold her own son. Social workers threatened her with jail until she signed away her parental rights. Her son vanished, his whereabouts and new identity known only to an adoption agency that would never share the slightest detail about his fate.

Claiming to be acting in the best interests of all, the adoption business was founded on secrecy and lies. American Baby lays out how a lucrative and exploitative industry removed children from their birth mothers and placed them with hopeful families, fabricating stories about infants' origins and destinations, then closing the door firmly between the parties forever. Adoption agencies and other organizations that purported to help pregnant women struck unethical deals with doctors and researchers for pseudoscientific "assessments," and shamed millions of women into surrendering their children.

Gabrielle Glaser dramatically demonstrates the power of the expectations and institutions that Margaret faced. Margaret went on to marry and raise a large family with David's father, but she never stopped longing for and worrying about her firstborn. She didn't know he spent the first years of his life living just a few blocks away from her; as he grew, he wondered about where he came from and why he was given up. Their tale--one they share with millions of Americans--is one of loss, love, and the search for identity.

Adoption's closed records are being legally challenged in states nationwide. Open adoption is the rule today, but the identities of many who were adopted or who surrendered a child in the postwar decades are locked in sealed files. American Baby illuminates a dark time in our history and shows a path to reunion that can help heal the wounds inflicted by years of shame and secrecy.

Gabrielle Glaser is a New York Times bestselling author and journalist whose work on mental health, medicine, and culture has appeared in The New York Times Magazine, The New York Times, The Daily Beast, The Washington Post, Los Angeles Times, The Atlantic, and many other publications. She has appeared on many national radio and television programs, including NPR's Fresh Air, All Things Considered, WNYC's On the Media, and The Brian Lehrer Show, NBC's Nightly News, and ABC's World NewsTonight.

"Powerful...Tells a singular story to illuminate a universal truth...In [Margaret and David’s] intimate tale are the seeds of today’s adoption practices and parenting norms, as our past continually redefines our present...That Margaret and David find each other is not a spoiler….The hows of the search, and what happens next, read like a novel, one likely to bring tears."—The New York Times Book Review

“A fascinating indictment of adoption’s early history that’s as gripping as a novel.”—People Magazine “Book of the Week”

“Glaser proves herself a relentless researcher.  The intimate story of Glaser’s subjects makes her book compelling, but the societal dots she’s able to connect make it important.”—Washington Post

“In American Baby, journalist Gabrielle Glaser sets Margaret and David’s poignant, painful, and powerful story in the context of adoption practices at the height of the Baby Boom, which left so many feeling lost and unloved.  As she reviews what has – and has not – changed, Glaser also raises important questions about the ethical, legal, and civil rights and obligations of adopted children, adoptive parents, and birth mothers.”—Psychology Today

“Riveting… The emotional heft of American Baby comes from Margaret’s wrenching story, which Glaser tells with compassion. The author also does an excellent job charting the social forces that collided to shape her experience.”—Christian Science Monitor

“In American Baby, author and journalist Gabrielle Glaser uncovers the infuriating and tragic history of young women forced to give up their babies for adoption in post-WWII US.”—Ms. Magazine

“Readers who enjoyed memoirs such as Dani Shapiro's "Inheritance" and Nicole Chung's "All You Can Ever Know" will find "American Baby" an excellent follow-up…Based on the statistics that Glaser cites, many readers will have a personal connection to this story, but a connection isn't required to be moved and enriched by reading it.”—The Minneapolis Star Tribune

"A heart-wrenching tale that will resonate with many… The results of Glaser’s extensive research read like a well-crafted, tension-filled novel.”—BookPage (starred review)

“A woman is forced to relinquish her newborn in this eye-opening look at the dark side of an allegedly benevolent industry…Interweaving the saga of Margaret’s fight to keep her baby with copious data and deeply researched history, Glaser’s essential and long overdue study should be required reading for anyone touched by, or considering, non-intrafamily adoption.”—Washington Independent Review of Books

"[A] sweeping and novelistic account . . . This is more than just the story of “a lifelong separation and a bittersweet reunion.” It’s a well-paced work of research made stronger by Glaser’s ability to write with clarity and intensity about a harsh reality. Never losing sight of her story’s emotional heart, Glaser delivers a page-turning and illuminating work."—Publishers Weekly (*boxed and starred review*)

“A searing narrative that combines the detailed saga of one unwed teenage mother with deep research on all aspects of a scandalous adoption industry…Throughout, the author deftly follows this genuinely human story, exposing the darker corners of adoption in 20th-century America. In 2006, Ann Fessler's The Girls Who Went Away lifted the curtain on the plight of other women just like Margaret, and Glaser accomplishes an equally impressive feat here. In a narrative filled with villains, a birth mother and her son exhibit grace. A specific story of identity that has universal appeal for the many readers who have faced similar circumstances.”—Kirkus Reviews (*starred review*)

“Glaser painstakingly researched Margaret's story, and here wraps it around a social history of adoption, exploring evolving cultural and political views about motherhood. She shows how orphan trains and babyfarms gave way to corporate private adoptions, and documents the years-long legal battles wrought by adoptees and birth parents trying to access their personal histories…This book is a testament to the mothers who never forgot their children, and searched for them with love and longing.”—Booklist, (*starred review*)

“Through powerful empathy and tireless reporting, Gabrielle Glaser lays bare the coercive system under which three million young mothers surrendered their babies for adoption in the years leading up to Roe v Wade. Piecing together the heartbreaking parallel stories of one woman and the child she could never forget, Glaser skillfully unearths the attitudes toward sex, marriage, gender, and race that underlay this chilling chapter in a not-so-distant American past. American Baby will shatter once and for all the comforting myth that relinquishing an infant to a stranger in a ‘closed adoption’ was invariably ‘better for everyone.’”—Janny Scott, author of The Beneficiary and A Singular Woman

“This moving story of one teenager's experience with coerced adoption in the 1960s is also an eye-opening expose of an entire industry built on lies, greed, racism, sexism, and stunning amounts of medical malpractice. Riveting—and sobering.”—Stephanie Coontz, author of The Way We Never Were: American Families and the Nostalgia Trap and Marriage: A History

“This extremely intimate portrait of an adoptee and his birth mother comes closer than any other book I’ve read in describing the interplay of nature and nurture that shapes the human personality. The book is at the same time a triumph of investigative reporting about the abuse of birth mothers and adoptees: many of us are familiar with the stories of the Catholic girls whose babies were seized by nuns in in early 20th century Ireland, but who knew this was happening in New York in the 1960s and was done by Ivy League educated doctors and social workers. It is an eye-opener in so many different ways.”—Barbara Demick, author of Nothing to Envy

“Gabrielle Glaser shines a searing light on adoption during the post-WWII Baby Boom years, a time of celebration of family.  She illuminates the cruel, secretive, and shaming aspects of adoption, a stark contrast to the prevailing view of adoption as a happy solution for birth mothers, babies, and adopting families.  The story of Margaret and David, a mother and son pulled apart at David's birth, will break your heart.”—Elaine Tyler May, author of Homeward Bound: American Families in the Cold War Era and America and the Pill: A History of Promise, Peril, and Liberation