GetDismissed: The Sequel: Just When You Thought It Was Safe To Drive In California Again. Get your traffic ticket dismissed, without (Paperback) 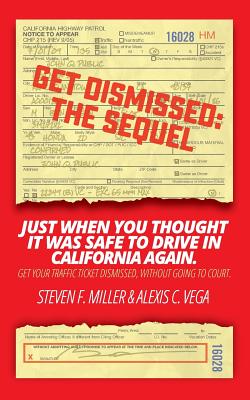 Steven F. Miller, CEO/President and Founding Member of The Ticket Advocate, LLC. Steve has been leading the fight against traffic tickets for over 14 years. Practically inventing this industry, Steve formed TicketBust.com in 2004, with one goal in mind; to help drivers contest and dismiss their traffic tickets quickly, easily, and inexpensively. Steve has continued to expand TicketBust.com by developing and deploying all the necessary solutions to assist drivers with contesting their traffic tickets. Steve has been featured as an authority on many television, radio, and online networks discussing traffic tickets in California. In addition to being a thought leader and business entrepreneur, Steve is also a published author. Based on the knowledge acquired while developing and running a successful traffic ticket service in California, Steve knew that there had to be an easier, simpler, and better way to contest a traffic ticket. Steve set out to create a new and revolutionary way to contest a traffic ticket by enabling the masses of people receiving tickets and empowering them with the ability to fight back. Thus, the GetDismissed service was born and released in February, 2015. Steve has now transformed GetDismissed into a membership service that allows all California drivers to contest their traffic tickets for free. Steve is a published author, his books include, 2011 - "Traffic Tickets. Don't Get Mad. Get Them Dismissed." 2012 - "Traffic Tickets. Stories From The Street. The Ones Who GOT OFF." 2015 - "GetDismissed: No Brainwork Required, It's That Simple." And now in 2018, his new book "GetDismissed: The Sequel. Just When You Thought It Was Safe To Drive In California Again." Steve has also been featured on TV, Radio, Print, and Online as a traffic ticket expert talking about such subjects as distracted driving, contesting traffic tickets, traffic ticket myths, traffic ticket tips, traffic law, and more. Prior to TicketBust.com, Steve was CEO of MediaHippo, Inc., an interactive agency focused on web, DVD, and multimedia development. Steve was instrumental in promoting and marketing the Kodak Photo CD technology in the 1990's, authored many articles and was a featured speaker at numerous industry events. Steve graduated from California State University Northridge with a BS in Accounting. Steve worked for Deloitte Haskins and Sells as a Certified Public Accountant, prior to starting his own accounting agency.