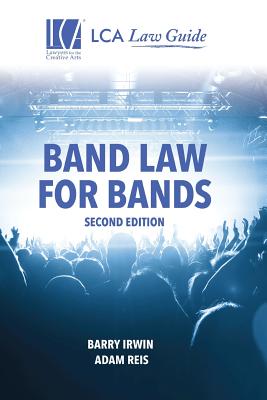 This Second Edition of Band Law for Bands addresses the most common legal issues faced by music groups. It covers the fundamental issues bands face, including the importance of a band agreement and its key terms; how to protect your band name; which band members own your songs and recordings without an agreement setting forth those ownership rights, basics of drafting agreements governing ownership rights; registration of copyrights in your songs and recordings; how to make money from your songs and recordings; the key terms and pitfalls of recording, management, and agency contracts; and issues arising when a band dissolves. It should become your first source of information when your band confronts a legal issue.

Barry Irwin is a lawyer who, for the last twenty-four years has practiced in the area of intellectual property litigation and entertainment law. He has first-chaired many high-stakes patent, copyright, trademark, trade secret, restrictive covenant, unfair competition and antitrust matters. Barry is also an Adjunct Professor at Notre Dame Law School where he teaches Patent Litigation and Entertainment Law.

Each year, for over a decade, Barry has been named a Leading Lawyer and a Super Lawyer. Barry has also received the rare distinction of being named a Fellow of the Litigation Counsel of America, an invitation-only honorary trial lawyer society composed of less than one-half of one percent of American lawyers. LCA Fellows are selected based on their legal excellence and accomplishments in litigation and superior ethical reputations.

Barry has served as a member of Lawyers for the Creative Art's Board since 2010. That year, Barry accepted LCA's Distinguished Service to the Arts Award presented to Barry's law firm, as Barry's pro bono efforts were highlighted as a major reason for the award. And, in 2016, Barry was award LCA's coveted Thomas R. Leavens Award.

Adam Reis is an associate at Irwin IP LLC where he focuses on intellectual property litigation and entertainment law. He represents bands and performing artists in a wide range of matters and across several genres of music. Adam received his B.A. in Chemistry from Miami University in 2010 and his J.D. from Chicago-Kent College of Law in 2015.