Healing One Cell At a Time: Unlock Your Genetic Imprint to Prevent Disease and Live Healthy (Paperback) 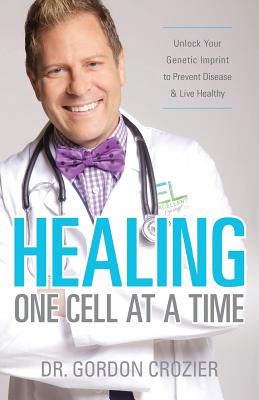 Before Gordon Crozier was "Doctor" Gordon Crozier, he was chronically ill. He was so sick he couldn't crawl off the bed, so ill he could hardly eat, so cognitively impaired that for two years he lost the ability to read. He was desperate and his doctors literally gave up.

But there was a silver lining in his sickness; it led him to find answers in the study of integrative medicine and how a person's genetic make-up can ultimately bring healing. Dr. Crozier's own sickness became a pathway to healing for others.

In this groundbreaking book, you'll discover how Dr. Gordon Crozier today practices integrative, genetic-based medicine, specializing in treating people who have been sidelined by conventional medicine. Typically, his patient has tried every therapy, every prescription drug, and every treatment plan known to man--and they're still sick, sometimes to the point of immobility. Dr. Crozier sees recoveries so profound they literally change people's lives.

Dr. Crozier uses a revolutionary new medical approach to fight disease and bring healing one cell at a time. He is a pioneer in using genetics-based medicine to get an entire picture of how an individual may attain health and prevent the effects of possible disease-related symptoms. In this book you'll learn how you too might find better health and wellness, one cell at a time.