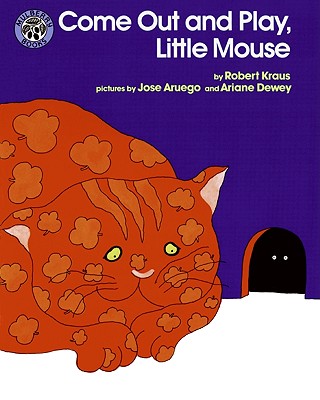 When little mouse accepts the cat's invitation to play, he doesn't know what kind of game the cat really has in mind. "A splendid picture book with brilliantly colored and expressive illustrations, funny and exciting."--Horn Book.

Robert Kraus is the author of Little Louie the Baby Bloomer and Leo the Late Bloomer, illustrated by Jose Aruego, and the author and illustrator of dozens of books for children.

Jose Aruego’s books for young readers have earned the applause of critics, teachers, librarians, and parents—as well as the affection of children everywhere. Mr. Aruego’s comic animals are immediately recognizable as they cavort through clear, vibrant landscapes, carrying out the action that the simple text has set in motion. It is a style one reviewer has termed “illustrative mime.”

Jose Aruego was born in the Philippines, where he studied law. But after practicing briefly, he decided to come to the United States to study graphic arts and advertising at Parsons School of Design in New York City. After graduation, he worked in advertising before taking up the demanding job of cartooning for The Saturday Evening Post, The New Yorker, Look, and other magazines.

Mr. Aruego said: “Every Wednesday I would go to the cartoon editor with fifteen or sixteen drawings in hand, from which he might select one for publication. The tension was terrible, because selling cartoons was how I made my living. But I learned a lot from the rejected work, so it wasn’t a waste. The sink-or-swim experience of drawing cartoons was how I learned to make the most of a small amount of space.” Both abilities have helped him in his career as a children’s book author and illustrator, which he began with the publication of The King and His Friends in 1969.

Although he is known for his amusing characters, Jose Aruego takes writing and drawing for children very seriously. After more than three dozen books he feels he is still learning his craft and getting to know his audience. From the popularity and appeal of Jose Aruego’s books, it is obvious that he has both the artistic skill and the imagination to reach the world of children. His work has a distinctive rhythm, and his humorous animal characters have a gaiety and playfulness that children adore.

“Each project teaches me something new and makes me a better artist. Each book brings me closer to children,” he said. “I have found from making appearances at schools that when kids draw for themselves, most of them like to make funny pictures. So I show them how to draw an alligator. It’s a simple drawing and the teachers tell me that after my visit, Aruego alligators show up all over the school.”

As a team, Ariane Dewey and Jose Aruego have illustrated over sixty children's books, including Little Louie the Baby Bloomer and Leo the Late Bloomer. She lives in New York City.

"My very first memory is of dark blue walls and off-white trim. My mother confirms this unusual baby-girl’s-room color scheme in the house where I lived until age one. Possibly this is why one of my favorite colors is darkish blue-jean blue. The other is brilliant orange.

"As a child I pored over Chicago’s Shedd Aquarium catalog of exotically colored fish that seemed too gaudy to be real. My mother and I looked through art books and then sketched portraits of each other or painted watercolors of the armloads of wildflowers we picked. We still love to discuss the subtle juxtapositions of the colorful scenes and objects around us.

"Art was the most enjoyable part of school. I liked to squish gobs of finger paint on wet paper, or to write, illustrate, and bind stories into books, or, best of all, to paint stage sets for the school plays. I began to look at whatever I saw in terms of which medium—oil, pastel, collage, watercolor—would best catch the mood and texture before me. At Sarah Lawrence College I majored in painting and sculpture. After graduation I couldn't find an auto body shop willing to lend me space to work on welded sculptures. So I got a job with an industrial design firm doing picture research, among other more mundane tasks, and later became an art editor for a textbook publisher.

"Soon after that I began writing and illustrating books for children with Jose Aruego, whimsical books with his clever lines and my vivid colors. Jose draws and I paint. We have illustrated some sixty books together, some of which we have also written. Critics have been kind, but, more important, children have been enthusiastic both in the United States and in the many foreign countries where our books have been published.

"My fingers finally became itchy to do my own drawings, so I started by retelling and illustrating the stories I loved best as a child. A mini-series of regional American tall tales enabled me to indulge my sense of the absurd. These heros and heroines are offbeat, upbeat, irreverent, hilarious, and a lot of fun to draw. Since I also love research, I delight in taking on nonfiction subjects and handling them with fantasy. Color is the basis of my art, while writing and drawing help to describe my colorful visions.

"Whatever the subject, I want my readers to stretch their imaginations, to see with their minds’ eyes what happens between one picture and the next. I want to make them explore and smile.

"I live in New York City with my husband, Claus Dannasch."