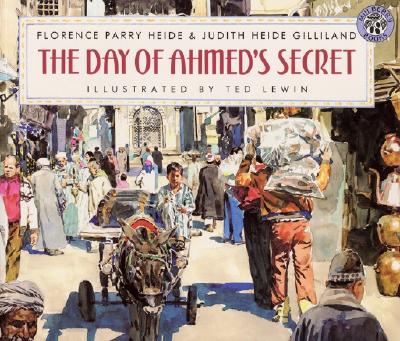 The Day of Ahmed's Secret

As young Ahmed delivers butane gas to customers all over the city of Cairo, he thinks, I have a secret. All day long, as he maneuvers his donkey cart through streets crowded with cars and camels, down alleys filled with merchants' stalls, and past buildings a thousand years old, Ahmed keeps his secret safe inside. It is so special, so wonderful, that he can reveal it only to his family, only when he returns home, only at the end of the day.

Ted Lewin grew up in an old frame house in Buffalo, New York, with two brothers, one sister, two parents, a lion, an iguana, a chimpanzee, and an assortment of more conventional pets. The lion was given to his older brother, Don, while he was traveling as a professional wrestler, and he shipped it home. The family kept Sheba in the basement fruit cellar until Don returned and their mother convinced him to give it to the Buffalo zoo.

Ted always knew he wanted to be an illustrator. As a child he copied the work of illustrators and painters he admired, including N. C. Wyeth, Winslow Homer, John Singer Sargent, Velázquez, and Goya. When it came time to go to art school (Pratt), he needed to earn money to finance his education. So, following in his brother’s footsteps, he took a summer job as a wrestler -- the beginning of a 15-year part-time career that eventually inspired his autobiographical book I Was a Teenage Professional Wrestler. Ted’s career as an artist began with illustrations for adventure magazines, and it’s only over the last several years that he has devoted his time to writing and illustrating children’s books. "I’m having more fun doing this than anything I’ve ever done before," he says. He is an avid traveler, and many of his books are inspired by trips to such places as the Amazon River, the Sahara Desert, Botswana, Egypt, Lapland, and India. His Market!, published in 1996, showcases markets around the world, from Uganda to Ireland to Ecuador.

Touch and Go is a collection of stories about the adventures Ted had while researching his books. Gorilla Walk is his first collaboration with his wife, Betsy, and is about their trek to see the mountain gorillas in Uganda. They’ve just completed their second collaboration, Elephant Quest, set in the Okavango Delta of Botswana. Ted’s current project is about a Civil War drummer boy.

Ted and Betsy live in Brooklyn, New York, where they share their home with two cats, Slick and Chopper.