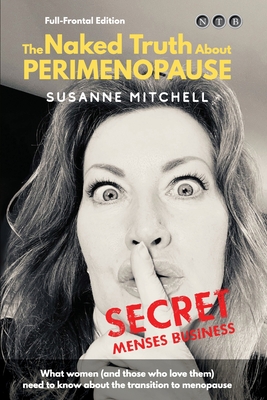 Silent and confusing, perimenopausal symptoms can ambush women as hormones begin their erratic descent, when they least expect them -often in their early 40s.

In The Naked Truth About PERIMENOPAUSE, Susanne Mitchell reveals her eye-opening journey through a roller-coaster hormonal retreat and the mysteries behind the transition to menopause.

She explores the relationship of hormones to our wellbeing, including why testosterone replacement is such a controversial therapy. 'I'm not talking about testosterone as in 25-year-old boyfriends, but in the form of a hormone cream that's harder to score than heroin.'

Disrupted sleep, fluctuating emotions and other embarrassing symptoms are often under-recognised and dismissed. Susanne offers context to 'conventional medical thinking' and the very real gender biases women face in the treatment of their hormonal health.

After seeking answers from leading experts in women's health, a whole new world opened up in her search for the truth about perimenopause. She found conflicting evidence and differences of medical opinion, and that there's far more at play than it seems.

Susanne's natural humour and thought-provoking commentary makes this a relatable read for every woman who wants to understand the challenges of hormone deficiency and take back control of their health and their lives.

Susanne Mitchell is a writer, media professional and self-professed kitchen sink philosopher. She has helped businesses share authentic stories through written and video content via her own small media consultancy.

She has 30 years of experience working with broadcasters, including the BBC Disney, ABC Australia and NBC America on feature films, documentaries and television drama. Though she turned down the opportunity to work with Sir David Attenborough at the BBC's Natural History Unit - a youthful decision she laments - Susanne has mingled with movie stars and travelled with the legendary former Australian prime minister Bob Hawke.

Daughter-in-law to the late Warren Mitchell, a British actor best known for playing Alf Garnet in Til Death do Us Part, she admits he played an important role through her 20s and 30s. Encouraging Susanne to expand her understanding of the world, Warren challenged her to have the courage of her convictions and to seek the truth, a pursuit that heavily influences her work.

Her second book, The Naked Truth About YOU, Unlock the Secret to a Kick Arse Life, will be released in late 2021. It's a refreshing and compelling look at today's hottest self-development topics that weaves a potent thread of philosophy, psychology, and neuroscience through an engaging narrative of true stories.

Using her own life experiences and living with type 1 diabetes, Susanne is an ordinary, insulin pump-wearing woman on a quest to improve who we are and how we choose to live. This mother of two young adults currently resides in Sydney with her partner Nick, son Rowan, two Burmese cat-dogs and a rescue hound called Crumpet.