The 4 Percent Universe: Dark Matter, Dark Energy, and the Race to Discover the Rest of Reality (Hardcover) 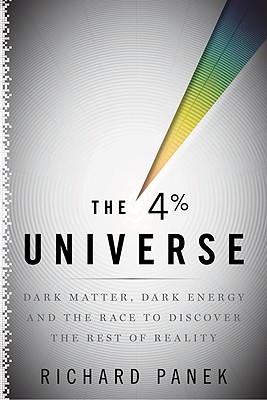 The epic, behind-the-scenes story of an astounding gap in our scientific knowledge of the cosmos.

In the past few years, a handful of scientists have been in a race to explain a disturbing aspect of our universe: only 4 percent of it consists of the matter that makes up you, me, our books, and every planet, star, and galaxy. The rest—96 percent of the universe—is completely unknown.

Richard Panek tells the dramatic story of how scientists reached this conclusion, and what they’re doing to find this "dark" matter and an even more bizarre substance called dark energy. Based on in-depth, on-site reporting and hundreds of interviews—with everyone from Berkeley’s feisty Saul Perlmutter and Johns Hopkins’s meticulous Adam Riess to the quietly revolutionary Vera Rubin—the book offers an intimate portrait of the bitter rivalries and fruitful collaborations, the eureka moments and blind alleys, that have fueled their search, redefined science, and reinvented the universe.

"The centerpiece of The 4% Universe is a compelling narrative of science at its best… serve[s] handsomely as an illuminating guide to the dark mysteries lying at the heart of the intersection of astronomy and fundamental physics."
—The Wall Street Journal

"A model for all would-be popular-science writers."
—Physics World

"Panek's passion for the mysteries of dark matter and dark energy wins the day. He succeeds because he recognizes that he's writing not just about red shifts and supernovae, but about people...the success of The 4 Percent Universe also stems from Panek's wisdom about how science works."
—The Washington Post "The balance between lively characters and provocative ideas keeps the book moving as quickly as any high stakes thriller, but the pay-off here is an answer of truly cosmic significance...the universe is keeping secrets from us--big secrets. Dark secrets. Panek's joyful journey through the wilds of modern cosmology gives us good reason to care about those secrets, and their sure-to-be surprising answers."
—Ad Astra, Magazine of National Space Society

"A superior account of how astronomers discovered that they knew almost nothing about 96 percent of the universe. Science writer Panek (The Invisible Century: Einstein, Freud, and the Search for Hidden Universes, 2005, etc.) points out that 50 years ago astronomers assumed they understood the cosmos and its history from the big bang to galaxy formation to its ultimate fate as expansion continued. One detail remained disturbing: Galaxies were moving too fast. Since gravity controls movements, they had to be heavier than predicted. By the 1980s, this "missing mass" problem became critical as it became clear that galaxies, including ours, were rotating so fast that missing mass far outweighs visible objects such as stars. Even after eliminating gas and dust, "dark matter" represents strange particles unknown to science. Astronomers also believed that gravity was slowing expansion of the universe but debated if galaxies would reverse themselves, continue to recede ever more slowly or (the favorite theory) simply stop. Panek describes frustrating struggles with high-tech detectors, complex computer algorithms and massive telescopes to search distant galaxies for the key. The answer came in the late '90s expansion wasn't slowing but speeding up. Flabbergasted astronomers understood that accelerating billions of galaxies requires immense energy. Since Einstein proved that energy and mass are equivalent, this "dark energy" makes up three-quarters of the universe. Dark energy added to dark matter reduces the familiar universe to 4 percent of the total. Panek delivers vivid sketches of scientists, lucid explanations of their work and revealing descriptions of the often stormy rivalry that led to this scientific revolution, usually a media cliche, but not in this case."
—Kirkus Reviews, STARRED review

"There has always been more to the universe than we can see. Science journalist Panek (The Invisible Century) offers an insider's view of the quest for what could be the ultimate revelation: the true substance of the unseen dark matter and energy that makes up some 96% of our universe. The search for these hidden elements began in the 1960s with astronomers asking whether the universe would end in an infinitely expanding "Big Chill" or a collapse into a "Big Crunch"--or whether the universe is a just-right "Goldilocks" space that would nurture stars and galaxies forever. To answer this question, scientists calculated the universe's mass and discovered there was far more mass than we could see. But where is this "missing mass" and what kind of exotic "dark" stuff is it made of? Panek gleefully describes a 'Wild West of the mind, where resources were scarce, competition was fierce, and survival depended on small alliances of convenience, often enduring just long enough to publish a paper.' This lively story of big personalities, intellectual competitiveness, and ravenous curiosity is as entertaining as it is illuminating."
—Publishers Weekly, STARRED review

"The 4% Universe is a lively and well-researched account of the personalities and ambitions of modern scientists."
—Alan Lightman, author of Einstein’s Dreams

"Somebody needed to tell this story—of all that is dark and mysterious in the cosmos. Science writer Richard Panek has risen to that task. In his journalistic yet artful style, Panek guides you through the quirky discoveries that established the existence of dark matter and dark energy. But along the way, you also get to meet the quirky cosmologists who got us there."
—Neil deGrasse Tyson, American Museum of Natural History, author of Death by Black Hole

"A contemporary adventure story of modern-day explorers who venture forth into the universe not by ships, but by telescopes and satellites. . . . Riveting."
—Lee Smolin, author of The Trouble with Physics

"It’s the biggest mystery of all: why is the universe expanding at an accelerated rate? At its heart is a search for what forces and particles make up reality. It baffled Einstein, and it now obsesses a cadre of fascinating cosmologists. By brilliantly capturing their passions and pursuits, Richard Panek has made this cosmic quest exciting and understandable."
—Walter Isaacson, author of Steve Jobs and Einstein: His Life and Universe

"The 4% Universe is a reliable and readable account of how scientists discovered—and are struggling to come to grips with—the astounding fact that most of the observable universe has not yet even been observed, much less understood. It has the further merit of relating how scientists arrive at their findings, rather than simply presenting their theories as objects of admiration or adoration. Highly recommended."
—Timothy Ferris, author of Coming of Age in the Milky Way and The Science of Liberty

"Modern cosmology tackles some of the biggest questions we have about the nature of the cosmos. In The 4% Universe, Richard Panek brings this quest down to a human scale. The rivalries, the surprises, and the excitement are brought vividly to life. People are a very tiny percentage of the universe, but we remain the most interesting part."
—Sean Carroll, author of From Eternity to Here: The Quest for the Ultimate Theory of Time