Inside the Dream Palace: The Life and Times of New York's Legendary Chelsea Hotel (Hardcover) 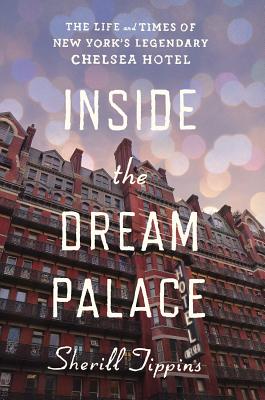 By Sherill Tippins
$30.00
Email or call for price.

The Chelsea Hotel, since its founding by a visionary French architect in 1884, has been an icon of American invention: a cultural dynamo and haven for the counterculture, all in one astonishing building. Sherill Tippins, author of the acclaimed February House, delivers a masterful and endlessly entertaining history of the Chelsea and of the successive generations of artists who have cohabited and created there, among them John Sloan, Edgar Lee Masters, Thomas Wolfe, Dylan Thomas, Arthur Miller, Allen Ginsberg, Bob Dylan, Janis Joplin, Leonard Cohen, Patti Smith, Robert Mapplethorpe, Andy Warhol, Sam Shepard, Sid Vicious, and Dee Dee Ramone. Now as legendary as the artists it has housed and the countless creative collaborations it has sparked, the Chelsea has always stood as a mystery as well: Why and how did this hotel become the largest and longest-lived artists’ community in the known world? Inside the Dream Palace is the intimate and definitive story.

Today the Chelsea stands poised in limbo between two futures: Will this symbol of New York's artistic invention be converted to a profit-driven business catering to the top one percent? Or will the Chelsea be given a rebirth through painstaking effort by the community that loves it? Set against these two competing possibilities, Inside the Dream Palace could not be more fascinating or timely.

SHERILL TIPPINS is the author of February House: The Story of W. H. Auden, Carson McCullers, Jane and Paul Bowles, Benjamin Britten and Gypsy Rose Lee Under One Roof in Wartime America. She lives in New York City.

“An inspired investigation into the utopian spirit of the Chelsea Hotel.”
—ELLE

“Cool hunters will appreciate Sherill Tippins’s Inside the Dream Palace: The Life and Times of New York’s Legendary Chelsea Hotel, a social history of the city’s sanctuary for postwar artists and It girls.”
—Vogue

"An impossible order for any writer: Get the Chelsea’s romance down on paper and try to keep up with Patti Smith and Joni Mitchell and Arthur Miller. But Sherill Tippins’s history does a vivid job of taking you up into those seedy, splendid hallways, now gone forever."
—New York Magazine

"With her lively Inside the Dream Palace, literary biographer Sherill Tippins succeeds where other historians studying New York landmarks have failed: She understands that even the most splendid buildings are mere settings for the personalities that inhabit them, and wisely bypasses rote chronology for the vigor of cultural excavation… The Chelsea Hotel may face an uncertain future, but Tippins’s enchanting book guarantees its renown for generations to come."
—Time Out New York

“An amazing history of not only the Chelsea Hotel but New York City itself. Thank you, Sherill Tippins, for this exciting story of how a building became a community and went on to be a legend. Inside the Dream Palace reads like the best fiction and never ever slows down from beginning to end.”
—Country Joe McDonald, activist and lead singer of Country Joe and the Fish

“Zealous, big-picture researcher Tippins not only tells compelling tales, she also weaves them into a strikingly fresh, lucid, and socially anchored history of New York’s world-altering art movements. Though its future is uncertain, Tippins ensures that the Chelsea Hotel, dream palace and microcosm, will live on in our collective memory.”
—Booklist, starred

“A revealing biography of the fabled Manhattan hotel, in which generations of artists and writers found a haven...A zesty, energetic history, not only of a building, but of more than a century of American culture.”
—Kirkus

“A fascinating account of how a single building in New York City nurtured a community of freaks, dreamers, and outcasts whose rejection of the status quo helped to transform it.”
—Publishers Weekly

“Not only essential to the understanding of this crucial New York City—and therefore American—cultural landmark but as majestic and populous as the edifice itself, and completely entertaining.”
—Daniel Menaker, author of My Mistake: A Memoir

“New York, the greatest city in the world, has been a magnet for bohemians since it was founded, and the Chelsea Hotel has been Bohemia's home address for more than a century. Sherill Tippins captures the mad magic of this storied building. She has written a history, not just of a hotel, but of a dream: the dream that art can change the world. Her serene and nonjudgmental eye gives coherence and shape to a story that resists any conventional frame. The Chelsea has had its high points and low, supreme artistic achievements and drug-addled suicides, sometimes in the same room. Tippins is an indispensable urban historian; her book is a guide to the lofty aspirations and crashing disappointments of America's artistic avant-garde over the last century and a half. An unforgettable read.”
—Oskar Eustis, Artistic Director, New York Public Theater

“The Chelsea Hotel is so much more than the place where Sid Vicious may or may not have killed his girlfriend; it was a social experiment turned incubator for creativity. It was home for the artists and weirdos that made this city so interesting—famous, infamous, and everything in between. Sherill Tippins has done a masterful job of condensing a history that could be volumes long, into a book that’s enthralling, enlightening and understandably wistful.”
—Judy McGuire, author of The Official Book of Sex, Drugs, and Rock 'n' Roll Lists