Jason and Medea: A Whirlwind of Ruin (Hardcover) 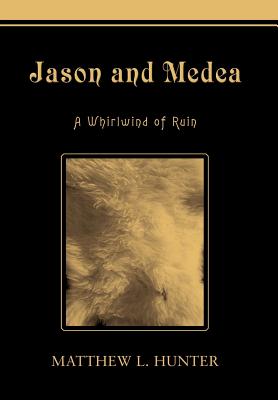 While the ending of the Golden Fleece myth, Medea's killing of her beloved children, is well known, her story and her reasoning are not. She can be understood through her deeds and words, though she may not be forgiven for her act. Jason, the hero of the Argo who wrested the Golden Fleece from a tyrant at the end of world, in this work is revealed as a man with flaws. Jason and Medea fully explores the ancient Greek tragedy, following the story line and philosophical trails. The gaps in the ancient telling are filled with imaginative invention without the aid of supernatural forces. Every baby boomer has seen the 60's movie Jason and the Argonauts with the animated harpies, skeleton warriors and bronze giant. Few know the details of the complete adventure. The telling of this tale relies upon the visualization prowess of the modern reader to examine the human condition. This tale has something more than mere adventure to hold the reader's attention. Great events propel the action. Men commit murder, steal, embark on paths of war, and whisper deceits. A woman acts both selflessly for love and sacrifices everything for it. Through language and dialogue, violence is revealed as monstrous and that love may be too. The voices of women articulate great sentiments and truths. Memory and loyalty are exposed as weak foundations for trust. At the beginning and then finally, the gods, the Fates and human responsibility all take center stage in Jason and Medea.