The Invisible Siege: The Rise of Coronaviruses and the Search for a Cure (Hardcover) 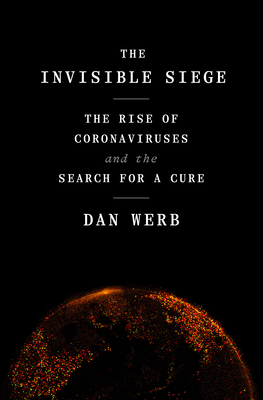 The urgency of the devastating COVID-19 pandemic has fixed humanity’s gaze on the present crisis. But the story of this pandemic extends far further back than many realize. In this engrossing narrative, epidemiologist Dan Werb traces the rising threat of the coronavirus family and the attempts by a small group of scientists who worked for decades to stop a looming viral pandemic.

When virologist Ralph Baric began researching coronaviruses in the 1980s, the field was a scientific backwater—the few variants that infected humans caused little more than the common cold. But when a novel coronavirus sparked the 2003 SARS epidemic, and then the MERS epidemic a decade later, Baric and his allies realized that time was running out before a pandemic strain would make the inevitable jump from animals to human hosts.

In The Invisible Siege, Werb unpacks the dynamic history and microscopic complexity of an organism that has wreaked cycles of havoc upon the world for millennia. Elegantly tracing decades of scientific investigation, Werb reveals how Baric’s team of scientists hatched an audacious plan not merely to battle COVID-19 but to end pandemics forever. Yet as they raced to find a cure, they ran into a complicated nexus of science, ethics, industry, and politics that threatened to derail their efforts just as COVID-19 loomed ever larger.

The Invisible Siege is an urgent and moving testament to the unprecedented scientific movement to stop COVID-19—and a powerful look at the infuriating factors that threaten to derail discovery and leave the world vulnerable to the inevitable coronaviruses to come.

Dan Werb, PhD, is an award-winning writer and epidemiologist whose work has appeared in The New York Times, Salon, and elsewhere. He holds faculty appointments at the University of California San Diego and the University of Toronto.