The Man in the Arena: The Story of an Aviator's Roller-Coaster Ride to the Clouds and Back (Paperback) 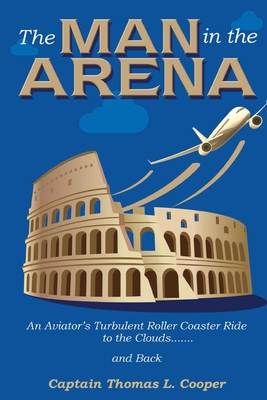 Fly with Captain Tom Cooper on this most incredible roller coaster ride from a rural, Mayberry-ish community in the foothills of North Carolina to the apex of the scheduled airline world.

A superb story teller, Captain Cooper takes you on a breathtaking trip with intermediate stops in the jungles of South America, revolutions in the tropics, the "sometimes" exciting exploits of a scheduled airline pilot and finally lands you on the top floor, mahogany row, of the volatile airline community.

Whether you are a professional or private pilot or just an "arm chair" adventurer, with his simple but vivid writing style, he escorts you through his 60 years of aviation experiences with page after page of a literary reality show that can only be narrated by someone who has actually lived it.

Captain Cooper shares his experiences, the good times and the bad, the wins and the losses, with clarity and with a simple credo that to be a success one must, to paraphrase Teddy Roosevelt, be "in the arena" and experience failures along with any successes that might come your way without fear of criticism or admonition.

Tom Cooper was born in High Point, North Caroline, May 26, 1936. After many disappointments, he finally landed his ideal position as a pilot for Eastern Airlines. Toward the end of his 29-year career with Eastern he became involved in the union strife aligning himself politically with management where his affection for Eastern won out over the tactics of the pilot's union.

After the demise of Eastern, with no funds, he started a small airline with an eight-passenger Cessna airplane. That commuter airline grew into a one hundred million dollar regional airline with marketing arrangements with both United and Continental Airlines.

In the mid seventies, during the Jimmy Carter administration, while still a pilot for Eastern Airlines, he inaugurated a charter route between Miami, Florida and Havana, Cuba. He operated this entity until selling the company in 2016. He is now retired and lives with his wife, Jerrie, in Wellington, Florida during the summer where he enjoys a modest home on a small fly-in community. The balance of their time is spent on their boat in North Key Largo, Florida.