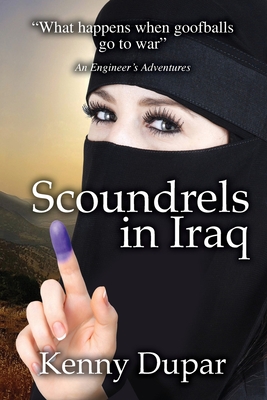 Men shooting their guns in dramatic fashion is a tiny fraction of wartime activity. The sizeable contributions of female Soldiers in Iraq have been largely excluded in media. Engineers, military intelligence, police, psych ops, aviation, transporters, commo, finance, postal, medical, staff pukes, the ash and trash, itty bitty units that plan, man guard posts and make water safe to drink haven't been given their due. Most Soldiers aren't the Infantry Boys who are kicking in doors and performing harrowing missions. People have seen a one sided, violent representation of the war in Iraq. Some Americans leave for war straight from their neighborhoods and families. Many of these citizen patriots have wicked skills and low impulse control. This book is written about them.

Criminality for Soldiers at war is more symbolic than real. If you are accused, the chain of command dispenses punishment according to the message it wants to send. Being in Iraq is a year-long jail sentence already, so appropriating multimillion dollar equipment (stealing) may seem worth the risk. If thievery benefits units and their missions, blind eyes get turned. But in the Army things can always get worse, so not getting caught is extremely important. Fresh from America, it was easy for Engineer Soldiers to adopt a gang mentality.

After combat operations supposedly concluded in the Spring of 2003, the US government's plan to occupy/stabilize the conquered was written on a cocktail napkin. At the infamous Abu Ghraib prison, greatly over worked Army Reservists, doing more with less, gave America a black eye with pictures of snarling dogs before blindfolded, naked prisoners. Insurgents fired mostly dud mortars aimlessly into forward operating bases, then ran. Saddam Hussein was captured and the narrator helped to secure him amidst the real Men in Black.