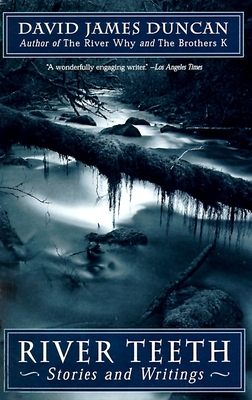 In his passionate, luminous novels, David James Duncan has won the devotion of countless critics and readers, earning comparisons to Harper Lee, Tom Robbins, and J.D. Salinger, to name just a few. Now Duncan distills his remarkable powers of observation into this unique collection of short stories and essays.

At the heart of Duncan's tales are characters undergoing the complex and violent process of transformation, with results both painful and wondrous. Equally affecting are his nonfiction reminiscences, the "river teeth" of the title. He likens his memories to the remains of old-growth trees that fall into Northwestern rivers and are sculpted by time and water. These experiences—shaped by his own river of time—are related with the art and grace of a master storyteller. In River Teeth, a uniquely gifted American writer blends two forms, taking us into the rivers of truth and make-believe, and all that lies in between.

David James Duncan is the author of two novels, The River Why and The Brothers K, and River Teeth, a joint memoir and collection of stories. The River Why ranks thirty-fifth on the San Francisco Chronicle list of The 20th Century's 100 Best Books of the American West. The Brothers K is an American Library Association Best Books Award-winner and a New York Times Notable Book. Both novels won the Pacific Northwest Booksellers Award.

Duncan has read and lectured all over the United States on wilderness, the writing life, the nonmonastic contemplative life, the fly fishing life, and nonreligious literature of faith. His work has appeared in Harper's, Outside, Orion, The Sun, Sierra, Big Sky Journal, Northern Lights, Gray's Sporting Journal, and many other publications. He lives with his family on a Montana trout stream.

"Poignant, funny, and artful, Duncan's Oriver teeth' are like elongated American haiku, stretching their grainy syllables from the home plate of nostalgia to the outfield fences of eternity." —Tom Robbins

"To read River Teeth is to have a stranger's recollections loom up out of vagary and namelessness, and to grip you as if they were your own." —Los Angeles Times

"David James Duncan is in love with water, the rivers and streams that coursed through his life. Believe me, you will be swept up by his rivers, carried downstream, and deposited in a new place. In that new place, Duncan will build a fire and tell you a bunch of stories. What else could you want?" —Sherman Alexie