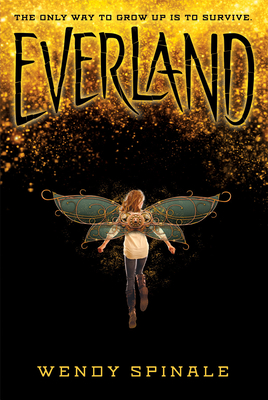 This is book number 1 in the Everland series.

London has been destroyed in a blitz of bombs and disease. The only ones who have survived are children, among them Gwen Darling and her siblings, Joanna and Mikey. They spend their nights scavenging and their days avoiding the ruthless Marauders -- the German army led by Captain Hanz Otto Oswald Kretschmer. Unsure if the virus has spread past England's borders but desperate to leave, Captain Hook hunts for a cure, which he thinks can be found in one of the survivors. He and his Marauders stalk the streets snatching children for experimentation. None ever return. Until the day they grab Joanna. As Gwen sets out to save her, she meets a daredevil boy named Pete. Pete offers the assistance of his gang of Lost Boys and the fierce sharpshooter Bella, who have all been living in a city hidden underground. But in a place where help has a steep price and every promise is bound by blood, it will cost Gwen. And are she, Pete, the Lost Boys, and Bella enough to outsmart Captain Hook?

Wendy Spinale is a former character actor for the Disneyland theme park (so she’s very familiar with the world of make-believe). She is the author of Everland and its follow-up, Umberland, as well as Lost Boy, a prequel novella to Everland.
Wendy lives with her family in the San Francisco Bay Area.

Praise for Everland
"In an exemplary debut, Spinale uses Gwen and Hook's voices to offer glimpses into the psyche of a man desperate to please his cruel mother and a girl intent on saving the only family she has left. This is a magical, wondrous treat, with a conclusion that's nothing less than epic." --Publishers Weekly (starred review)
"A fun and unique addition to the twisted fairy-tale genre, loaded with adventure, romance, and double crossing." --VOYA
"Peter Pan goes steampunk in this debut, which twists the familiar tale into a survival story complete with well-drawn characters, a blistering plot, and plenty of adventure." --Booklist
Praise for Umberland
"An unpredictable page-turner spun with dread, humor, and unexpected alliances." --Kirkus Reviews
"Dark in tone, desperate in intensity . . ." --Booklist
"[A] captivating adventure." --School Library Connection