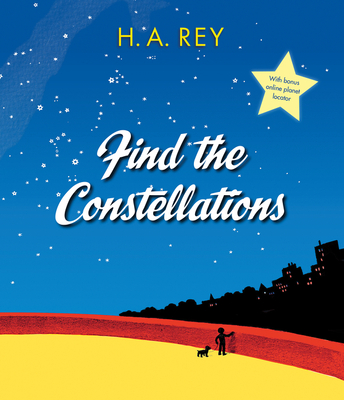 Containing star charts, a guide to the constellations, and details about seasons and the movement of the objects we see in the sky, this classic book makes H. A. Rey’s passion for astronomy evident on every page.

New updates concentrate on the planetary and solar system information in the latter part of the book. Facts and figures for each planet have been revised, and new scientific information has been added, such as Pluto’s reclassification as a dwarf planet. There's also a brand-new online resource that allows readers to track the positions of the planets in the night sky till the year 2100!

H. A. Rey (1898–1977) was born in Hamburg, Germany, near the world-famous Hagenbeck Zoo, and developed a lifelong love for animals and drawing. He and his wife, Margret (1906–1996), who studied art at the acclaimed Bauhaus school, had many pets—including two marmoset monkeys that joined them on one of their steamship journeys across the Atlantic. Hans and Margret’s world-famous curious monkey first appeared in a manuscript strapped to their bicycles as they fled wartime Paris for the safety of the United States. Committed philanthropists in their own lives, a portion of proceeds from each Curious George book sold flows to the Curious George Foundation, which funds programs for children that encourage inquisitiveness in learning and exploring. Curious George has been successfully adapted into a major motion picture and an Emmy-winning television show on PBS.www.curiousgeorge.com.

"A 'must' for public and school libraries and a wonderful book for an individual or family to own." - Horn Book Guide