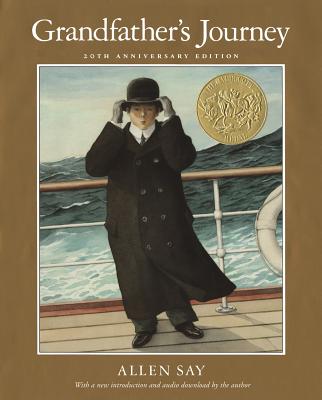 When he was a young man, Allen Say’s grandfather left his home in Japan to explore the world. He began his journey by crossing the Pacific Ocean on a steamship, then wandered the deserts, farmlands, and cities of North America. Allen Say lovingly tells the story of his own family’s cross-cultural history in elegant watercolor paintings that earned him a Caldecott Medal in 1994. This twentieth-anniversary gift edition of the modern classic features downloadable audio and an introduction by Allen Say.

Allen Say was born in Yokohama, Japan, in 1937. He dreamed of becoming a cartoonist from the age of six, and, at age twelve, apprenticed himself to his favorite cartoonist, Noro Shinpei. For the next four years, Say learned to draw and paint under the direction of Noro, who has remained Say's mentor. Say illustrated his first children's book -- published in 1972 -- in a photo studio between shooting assignments. For years, Say continued writing and illustrating children's books on a part-time basis. But in 1987, while illustrating THE BOY OF THE THREE-YEAR NAP (Caldecott Honor Medal), he recaptured the joy he had known as a boy working in his master's studio. It was then that Say decided to make a full commitment to doing what he loves best: writing and illustrating children's books. Since then, he has written and illustrated many books, including TREE OF CRANES and GRANDFATHER'S JOURNEY, winner of the 1994 Caldecott Medal. He is a full-time writer and illustrator living in Portland, Oregon.

"The immigrant experience has rarely been so poignantly evoked as it is in this direct, lyrical narrative that is able to stir emotions through the sheer simplicity of its telling." Horn Book, Starred