Women and the Right to Vote (A True Book) (A True Book: Women's History in the U.S.) (Paperback) 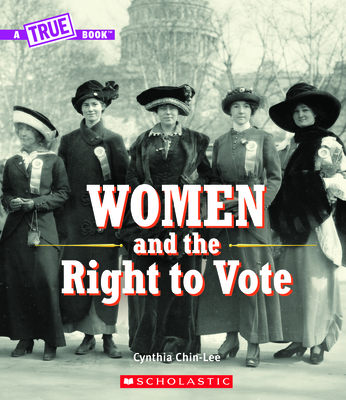 By Cynthia Chin-Lee
$7.95
On Our Shelves Now

The year 2020 brings the centennial celebration of the Nineteenth Amendment to the U.S. Constitution, which granted women the right to vote.
That victory was the hard-won result of a difficult fight waged over many decades by women from all walks of life. Some of those women gave their lives to the cause, while others, including women of color, were sidelined from this most basic right. This book tells all their stories.

Women are sometimes called the silent protagonists of history. But since before the founding of our nation until now, women have organized, marched, and inspired. They forced change and created opportunity.

With engaging text, fun facts, photography, infographics, and art, this new set of books examines how individual women of differing races and socioeconomic status took a stand, and how groups of women lived and fought throughout the history of this country. It looks at how they celebrated victories that included the right to vote, the right to serve their country, and the right to equal employment. The aim of this much-needed set of five books is to bring herstory to young readers!

Cynthia Chin-Lee is the author of three other children's books, including A is for Asia which was named one of the Best 100 American Children's Books of the Century by Ruminator Review. She lives in Palo Alto, California.