Natural Rights and the Right to Choose (Paperback) 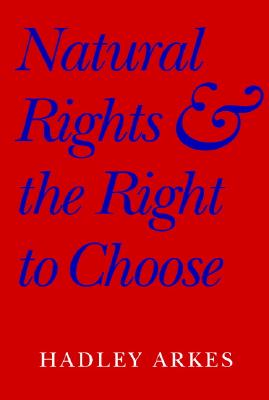 Over the last thirty years the American political class has come to talk itself out of the doctrines of "natural rights" that formed the main teaching of the American Founders and Abraham Lincoln. With that move, they have talked themselves out of the ground of their own rights. But the irony is that they have made this transition without the least awareness, and indeed with a kind of serene conviction that they have been expanding constitutional rights. Since 1965, in the name of "privacy" and "autonomy," they have unfolded, vast new claims of liberty, all of them bound up in some way with the notion of sexual freedom, and yet this new scheme of rights depends on a denial, at the root, of the premises and logic of natural rights. Hadley Arkes argues that the "right to choose an abortion" has functioned as the "right" that has shifted the political class from doctrines of natural right. The new "right to choose" overturned the liberal jurisprudence of the New Deal, and placed jurisprudence on a notably different foundation. And so even if there is a "right" to abortion, that right has been detached from the logic of natural rights and stripped of moral substance. As a consequence, the people who have absorbed these new notions of rights have put themselves in a position in which they can no longer offer a moral defense of any of their rights. Hadley Arkes is the Edward Ney Professor of American Institutions at Amherst College. He is the author of First Things (Princeton, 1986), Beyond the Constitution (Princeton, 1990), and The Reform Constitution (Princeton, 1994). He has been a contributor to First Things, the journal that took its name from his book of that title.