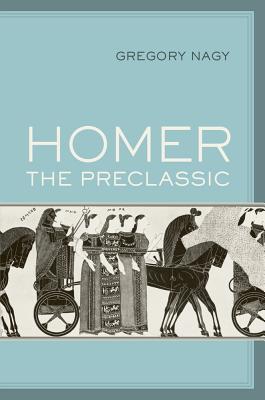 By Gregory Nagy
Email or call for price.

Homer the Preclassic considers the development of the Homeric poems-in particular the Iliad and Odyssey-during the time when they were still part of the oral tradition. Gregory Nagy traces the evolution of rival “Homers” and the different versions of Homeric poetry in this pretextual period, reconstructed over a time frame extending back from the sixth century BCE to the Bronze Age. Accurate in their linguistic detail and surprising in their implications, Nagy's insights conjure the Greeks' nostalgia for the imagined “epic space” of Troy and for the resonances and distortions this mythic past provided to the various Greek constituencies for whom the Homeric poems were so central and definitive.

Gregory Nagy is the Director of the Center for Hellenic Studies and the Francis Jones Professor of Classical Greek Literature and Professor of Comparative Literature at Harvard University. This book is adapted from his 2002 Sather Lectures at the University of California, Berkeley.

"Highly recomended for those interested in the Homeric epics."
— Near East Archaeological Society Bulletin

"Gregory Nagy, Director of the Center for Hellenic Studies at Harvard University, is a one-person Homeric Studies institution. His remarkable achievement in this conveniently reissued work may most captivate and impress antiquarians in several subfields of Classics. . . . Scholars and students not only in literary studies but also in political history, religious studies, art history, and archaeology will learn from lots of ingeniously marshaled information and well-reasoned speculation regarding Aeolian, Ionian, and finally Athenian hero cult; about celebration of a nation’s heroic past and about cultural politics and agendas."
— The European Legacy