From the Royal to the Republican Body: Incorporating the Political in Seventeenth- and Eighteenth-Century France (Paperback) 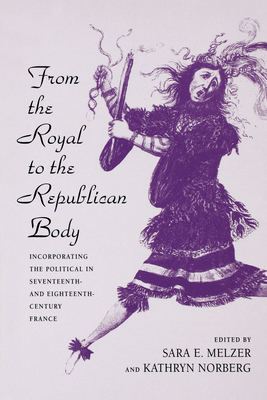 In this innovative volume, leading scholars examine the role of the body as a primary site of political signification in seventeenth- and eighteenth-century France. Some essays focus on the sacralization of the king's body through a gendered textual and visual rhetoric. Others show how the monarchy mastered subjects' minds by disciplining the body through dance, music, drama, art, and social rituals. The last essays in the volume focus on the unmaking of the king's body and the substitution of a new, republican body. Throughout, the authors explore how race and gender shaped the body politic under the Bourbons and during the Revolution. This compelling study expands our conception of state power and demonstrates that seemingly apolitical activities like the performing arts, dress and ritual, contribute to the state's hegemony. From the Royal to the Republican Body will be an essential resource for students and scholars of history, literature, music, dance and performance studies, gender studies, art history, and political theory.

Sara E. Melzer is Associate Professor of French at the University of California, Los Angeles, author of Discourses of the Fall: A Study of Pascal's Pensées (California, 1986), and coeditor (with Leslie W. Rabine) of Rebel Daughters: Women and the French Revolution (1992). Kathryn Norberg is an Associate Professor at UCLA and former Director of the UCLA Center for the Study of Women. She has coedited (with Philip T. Hoffman) Fiscal Crises, Liberty, and Representative Government, 1450-1789 (1994) and is the author of Rich and Poor in Grenoble, 1600-1814 (California, 1985).