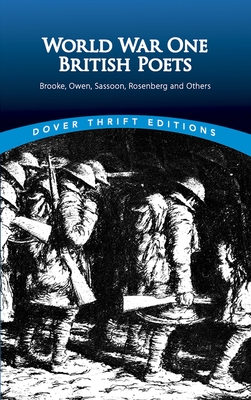 Ironically, the horrors of World War One produced a splendid flowering of British verse as young poets, many of them combatants, confronted their own morality, the death of dear friends, the loss of innocence, the failure of civilization, and the madness of war itself.
This volume contains a rich selection of poems from that time by Rupert Brooke, Wilfred Owen, Siegfried Sassoon, Isaac Rosenberg, and others known especially for their war poetry -- as well as poems by such major poets as Robert Graves, Thomas Hardy, A. E. Housman, Robert Bridges, and Rudyard Kipling.
Included among a wealth of memorable verses are Rupert Brooke's The Soldier, Wilfred Owen's Anthem for Doomed Youth, In the Pink by Siegfried Sassoon, In Flanders Fields by Lieut. Col. McCrae, Robert Bridges' To the United States of America, Thomas Hardy's In Time of 'The Breaking of Nations, ' as well as works by Walter de la Mare, May Wedderburn Cannan, Ivor Gurney, Alice Meynell, and Edward Thomas.
Moving and powerful, this carefully chosen collection offers today's readers an excellent overview of the brutal range of verse produced as poets responded to the carnage on the fields of Belgium and France.