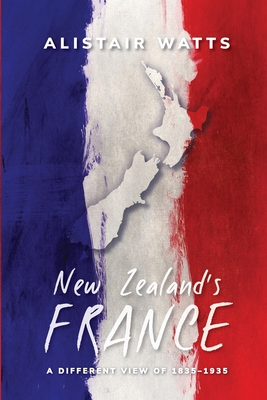 In New Zealand's France, Dr Alistair Watts investigates the origins of the New Zealand nation state from a fresh perspective - one that moves beyond the traditional bicultural view prevalent in the current New Zealand historiography. That New Zealand became British in the 1840s owes much, Dr Watts contends, to that other great colonial power of the time, France. The rich history of British antagonism towards the French was transported to New Zealand in the 1830s and 1840s as part of the British colonists' cultural baggage, to be used in creating an old identity in a new land.

Even as the British colonists sought a new beginning, this defining anti-French characteristic caused them to override the existing Māori culture with their own constructs of time and place. Leaving their signature names in the cities of Wellington and Nelson and naming their streets after Waterloo and Collingwood, the British colonisers attempted to establish a local antithesis of France through a bucolic Little Britain in the South Pacific.

It was this legacy, as much as the assumed bicultural origins of modern New Zealand, that produced a Pacific country that still relies on the symbolism of the Union Jack embedded in the national flag and the totemic constitutional presence of the British Crown to maintain its national identity. This is the story of how this came about.