Founding Factions: How Majorities Shifted and Aligned to Shape the U.S. Constitution (Hardcover) 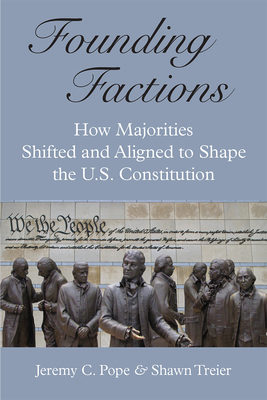 The fundamental importance of the 1787 Constitutional Convention continues to affect contemporary politics. The Constitution defines the structure and limits of the American system of government, and it organizes contemporary debates about policy and legal issues—debates that explicitly invoke the intentions and actions of those delegates to the Convention. Virtually all scholarship emphasizes the importance of compromise between key actors or factions at the Convention. In truth, the deep structure of voting at the Convention remains somewhat murky because the traditional stories are incomplete. There were three key factions at the Convention, not two. The alliance of the core reformers with the slave interests helped change representation and make a stronger national government. When it came time to create a strong executive, a group of small state delegates provided the crucial votes. Traditional accounts gloss over the complicated coalition politics that produced these important compromises, while this book shows the specific voting alignments. It is true that the delegates came with common purposes, but they were divided by both interests and ideas into three crosscutting factions. There was no persistent dominant coalition of reformers or nationalists; rather, there was a series of minority factions allying with one another on the major issues to fashion the compromise. Founding Factions helps us understand the nature of shifting majorities and how they created the American government.

Jeremy C. Pope is Associate Professor of Political Science and Co-Director of the Center for the Study of Elections and Democracy at Brigham Young University.
?
Shawn Treier is Senior Lecturer at the School of Politics and International Relations at Australian National University.