A World of Fiction: Digital Collections and the Future of Literary History (Digital Humanities) (Hardcover) 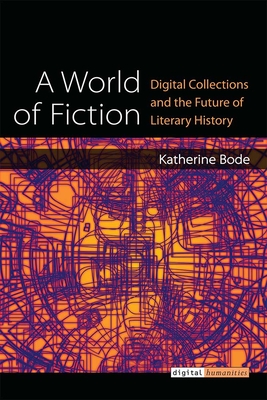 By Katherine Bode
Email or call for price.

During the 19th century, throughout the Anglophone world, most fiction was first published in periodicals. In Australia, newspapers were not only the main source of periodical fiction, but the main source of fiction in general. Because of their importance as fiction publishers, and because they provided Australian readers with access to stories from around the world—from Britain, America and Australia, as well as Austria, Canada, France, Germany, New Zealand, Russia, South Africa, and beyond—Australian newspapers represent an important record of the transnational circulation and reception of fiction in this period.

Investigating almost 10,000 works of fiction in the world’s largest collection of mass-digitized historical newspapers (the National Library of Australia’s Trove database), A World of Fiction reconceptualizes how fiction traveled globally, and was received and understood locally, in the 19th century. Katherine Bode’s innovative approach to the new digital collections that are transforming research in the humanities are a model of how digital tools can transform how we understand digital collections and interpret literatures in the past.

Katherine Bode is Associate Professor of Literary and Textual Studies at the Australian National University.

“A major international intervention in the fields of book history and digital humanities research, and a major recalibration of the relationship between Australian literature and world literary studies. A World of Fiction will have a significant impact.”­
—Professor Robert Dixon, The University of Sydney

“A terrific intellectual force. Excellent and lucid. This is a first-rate contribution to digital humanities and literary textual scholarship.”
—Johanna Drucker, UCLA

“Bode has been influential in Australian literary studies since she began publishing about a decade ago, and there is no doubt this book will be a field-defining intervention. It is a model of scholarly work, especially in its redefining of the literary system. Literary history and digital literary humanities are lucky to have such an intellectually accomplished and confident worker in the field.”
—Philip Mead, University of Western Australia