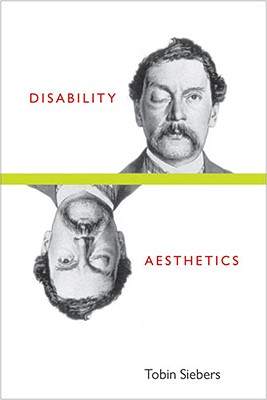 By Tobin Anthony Siebers
Email or call for price.

"Disability Aesthetics ambitiously redefines both 'disability' and 'aesthetics,' showing us that disability is central not only to modern art but also to the way we apprehend (and interact with) bodies and buildings. Along the way, Tobin Siebers revisits the beautiful and the sublime, 'degenerate' art and 'disqualified' bodies, culture wars and condemned neighborhoods, the art of Marc Quinn and the fiction of Junot Díaz---and much, much more. Disability Aesthetics is a stunning achievement, a must-read for anyone interested in how to understand the world we half create and half perceive."
---Michael Bérubé, Paterno Family Professor in Literature, Pennsylvania State University

"Rich with examples of the disabled body in both historical and modern art, Tobin Siebers's new book explores how disability problematizes commonly accepted ideas about aesthetics and beauty. For Siebers, disability is not a pejorative condition as much as it is a form of embodied difference. He is as comfortable discussing the Venus de Milo as he is discussing Andy Warhol. Disability Aesthetics is a prescient and much-needed contribution to visual & critical studies."
---Joseph Grigely, Professor of Visual and Critical Studies, The School of the Art Institute of Chicago

Disability Aesthetics is the first attempt to theorize the representation of disability in modern art and visual culture. It claims that the modern in art is perceived as disability, and that disability is evolving into an aesthetic value in itself. It argues that the essential arguments at the heart of the American culture wars in the late twentieth century involved the rejection of disability both by targeting certain artworks as "sick" and by characterizing these artworks as representative of a sick culture. The book also tracks the seminal role of National Socialism in perceiving the powerful connection between modern art and disability. It probes a variety of central aesthetic questions, producing a new understanding of art vandalism, an argument about the centrality of wounded bodies to global communication, and a systematic reading of the use put to aesthetics to justify the oppression of disabled people. In this richly illustrated and accessibly written book, Tobin Siebers masterfully demonstrates the crucial roles that the disabled mind and disabled body have played in the evolution of modern aesthetics, unveiling disability as a unique resource discovered by modern art and then embraced by it as a defining concept.

Tobin Siebers is V. L. Parrington Collegiate Professor of English Language and Literature and Art and Design at the University of Michigan. His many books include Disability Theory and The Subject and Other Subjects: On Ethical, Aesthetic, and Political Identity.

A volume in the series Corporealities: Discourses of Disability