Victory in Tripoli: How America's War with the Barbary Pirates Established the U.S. Navy and Shaped a Nation (Hardcover) 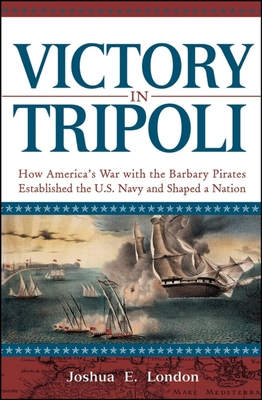 At the dawn of a new century, a newly elected U.S. president was forced to confront an escalating series of unprovoked attacks on Americans by Muslim terrorists sworn to carry out jihad against all Western powers. As timely and familiar as these events may seem, they occurred more than two centuries ago. The president was Thomas Jefferson, and the terrorists were the Barbary pirates. Victory in Tripoli recounts the untold story of one of the defining challenges overcome by the young U.S. republic. This fast-moving and dramatic tale examines the events that gave birth to the Navy and the Marines and re-creates the startling political, diplomatic, and military battles that were central to the conflict. This highly interesting and informative history offers deep insight into issues that remain fundamental to U.S. foreign policy decisions to this day.

JOSHUA E. LONDON is a Washington, D.C.-based writer. He has written on politics and public policy for many publications, including the American Spectator, Human Events, National Review Online, and Details: Promoting Jewish Conservative Values. London holds an M.A. in social science from the University of Chicago and a B.A. in political science from the University of California, Davis.