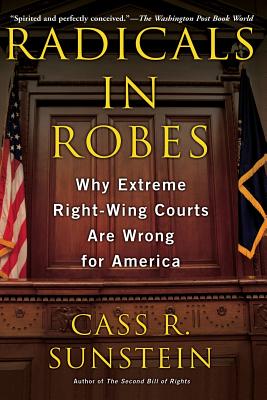 By Cass R. Sunstein
Email or call for price.
Usually Arrives in 2-10 Days

Most people think that the Supreme Court has a rough balance between left and right. This is a myth; in fact the justices once considered right-wing have now taken the mantle of the Court's moderates, and the liberal element has all but disappeared. Most people also think that judicial activism is solely a liberal movement. This is also a myth; since William Rehnquist was confirmed as Chief Justice in 1986, the Supreme Court has engaged in an unprecedented record of judicial activism. These two factors are feeding a movement to restore what many conservatives call "The Constitution in Exile," by which they mean the Constitution as it existed before the Roosevelt administration. Radicals in Robes explains what the restoration of this constitutional vision would mean. It would mean the end of the FCC, the SEC, the EPA, and every other federal agency that enacts regulations that have the force of law. It would mean that the clause of the First Amendment that says that Congress may make no law "respecting an establishment of religion" would be turned on its head. Marriage laws and many other familiar areas of modern life are all in the sights of this conservative movement. Radicals in Robes takes judicial philosophy out of the law schools and shows what it means when it intersects partisan politics. It pulls away the veil of rhetoric from a dangerous and radical right-wing movement and issues a strong and passionate warning about what conservatives really intend. One of the most respected legal theorists in the country, Cass R. Sunstein here issues a warning of compelling concern to us all.

Cass R. Sunstein is currently the Robert Walmsley University Professor at Harvard. From 2009 to 2012, he was Administrator of the White House Office of Information and Regulatory Affairs. From 2013 to 2014, he served on President Obama's Review Group on Intelligence and Communications Technologies. From 2016 to 2017, he served on the Defense Innovation Board of the US Department of Defense. Sunstein is author of many articles and books, including two New York Times bestsellers: The World According to Star Wars and Nudge (with Richard H. Thaler).

His other books include Republic.com, Risk and Reason, Why Societies Need Dissent, The Second Bill of Rights, Conspiracy Theories and Other Dangerous Ideas, The Ethics of Influence, and Can It Happen Here? Authoritarianism in America. He lives in Cambridge, Massachusetts.
@casssunstein