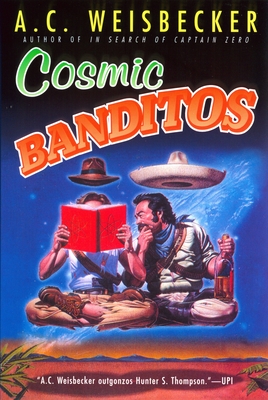 Soon to be a major motion picture starring John Cusack!

Mr. Quark is a down-on-his luck pot-smuggler hiding out in the mountains of Colombia with his dog, High Pockets, and a small band of banditos led by the irascible Jose. Only months before, these three and their fearless associates were rolling in millions in cash and high-grade marijuana, eluding prosecution on “ridiculously false” drug and terrorism charges. But times have quickly grown lean, and to liven up their exile, Jose decides to mug a family of American tourists.

Among the spoils are physics texts, which launch Mr. Quark on a side-splitting, boisterous adventure north to California, where he confronts the owner of the books with his own theories on relativity, the nature of the universe, and looking for the meaning of life in all the wrong places….

Allan Weisbecker is a novelist, screenwriter, award-winning photojournalist, and life-long surfer. He caught his first wave off Long Island, NY, in 1966, when he was 17 years old. Roaming the world in pursuit of waves during the heyday of the counterculture led to a career as a marijuana smuggler. He retired from that trade in 1980 and wrote Cosmic Banditos (Vintage), a gonzo rendering of his pot-pirate experiences.

From 1980 to 1995, Weisbecker was a screen writer for film and television programs including Miami Vice. During the 1990, he developed his career as a journalist and photographer, and his work now frequently appears in Smithsonian, Men’s Journal, Popular Photography, American Photo, Sailing, and all the major surfing publications. Weisbecker lives on Long Island.