Oil: Money, Politics, and Power in the 21st Century (Hardcover) 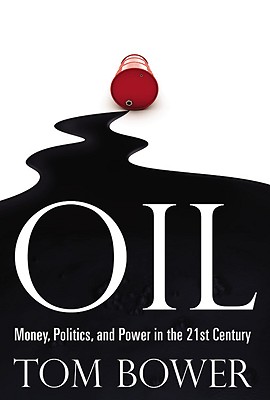 With unparalleled insight into BP and its safety record leading up to the disaster in the Gulf of Mexico, Tom Bower gives us a groundbreaking, in-depth, and authoritative twenty-year history of the hunt and speculation for our most vital natural resource.

Oil Money, Politics, and Power in the 21st Century

Twenty years ago oil cost about $7 a barrel. In 2008 the price soared to $148 and then fell to below $40. In the midst of this extraordinary volatility, the major oil conglomerates still spent over a trillion dollars in an increasingly frantic search for more.

The story of oil is a story of high stakes and extreme risk. It is the story of the crushing rivalries between men and women exploring for oil five miles beneath the sea, battling for control of the world's biggest corporations, and gambling billions of dollars twenty-four hours every day on oil's prices. It is the story of corporate chieftains in Dallas and London, traders in New York, oil-oligarchs in Moscow, and globe-trotting politicians-all maneuvering for power.

With the world as his canvas, acclaimed investigative reporter Tom Bower gathers unprecedented firsthand information from hundreds of sources to give readers the definitive, untold modern history of oil . . . the ultimate story of arrogance, intrigue, and greed.

Tom Bower has a distinguished reputation as an investigative historian, broadcaster and journalist, and is the author of several ground-breaking books about tycoons, politicians, intelligence, and post-war Europe.

"Sweeping in scope and densely detailed...a rare and highly illuminating global perspective on the industry over the last two decades."—The New York Times

"In this penetrating study of the modern petroleum industry, journalist and historian Bower) portrays the last 30 years as a time of both obscene profits and white-knuckle perils for the major oil companies.....his analysis of the industry and its shocking price swings is a persuasive one that eschews conspiracy theories and peak oil alarmism to focus on rising demand for reserves that are plentiful but hard to get at. The result is an illuminating look at a business whose real workings are more interesting than the mythology surrounding them."—Publishers Weekly

"Oil couldn't be a hotter or messier topic, making Bower's sprawling exploration of its modern history - told through the perspectives of engineers, traders, an oligarch and industry players such as BP's John Browne and Exxon's Lee Raymond- all the more timely."—USA Today

"[Bower's book is] ominous, even prescient, in what it says about BP's past practices."—LA Times

"With one of the worst environmental disasters in American history now troubling the waters and coastline of the Gulf of Mexico, this monumental history of the oil industry during the past two decades has much more relevance...This exhaustively researched and well-written volume covers the whole waterfront of major oil companies, the people who run them, the roles of politicians and governments in chasing oil, the traders who have yo-yoed its price, the wars that have been fueled by competition for it and the role it continues to play in regional and global instability."—Fort Worth Star Telegram

"Investigative journalist Tom Bower has used the same narrative approach as Sampson [The Seven Sisters] and Yergin [The Prize] to bring the industry's story forward from the 1980s to the present day, and his book bears comparison with theirs . . . the reader is ushered into a front-row seat, and what follows is often gripping. However fast-paced, Bower cleverly keeps the action in focus . . . [he] builds up a brilliant picture . . . [and] achieves impressively seamless continuity."—The Times Literary Supplement (London)

"A roller-coaster account . . . [Bower] has a real sense of the drama of deal-making and deal-breaking, of keeping vast corporations afloat in conditions that are rarely stable."—Telegraph (UK)

"A gripping and convincing account of the turbulent story of the global oil industry . . . the events he covers are scarcely less dramatic than those described in The Prize, including the ascent of the oil price to record highs. Bower's book has the advantage of being scorchingly topical . . . provides the fascinating story behind the headlines . . . a first-rate account of where the oil industry is now, and some useful pointers as to where it is going."—Financial Times (UK)